Brent Bozell and Tim Graham
|
Posted: Jul 10, 2019 12:01 AM
Share   Tweet
The opinions expressed by columnists are their own and do not necessarily represent the views of Townhall.com. 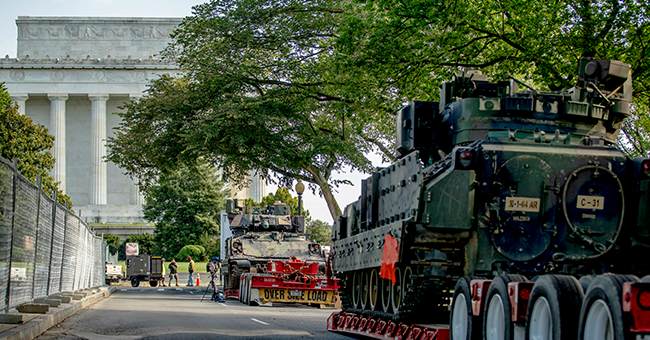 It's fair to say that a week doesn't go by where President Trump doesn't want to be the center of attention. That being the case, he must be well-satisfied with events leading up to the Fourth of July. He succeeded in creating another full-blown media panic about the erosion of democracy and the collapse of civilian control of the military, all because he is behaving like a dictator. The "news" manufacturers wanted us to know Trump was bending the national holiday into a celebration of his love of self.

The Washington Post kicked off the hate-filled hyperbole when Trump first announced that he would be giving a speech at the Lincoln Memorial and wanted tanks on the Washington Mall and jet flyovers. Stop here and ponder: What in the world is wrong with the president of the United States delivering an address on America's birthday? And what is wrong with showing an infinitesimal display of her military might that ensures her freedoms?

Well, the cost, silly. With a $4.4 trillion federal budget, the country cannot afford it. In its "news" coverage, the Post decried the costs of having the Secret Service suffer the inconvenience of defending the president on such an occasion.

Over the years, the Post and its media brethren have aggressively defended our tax money going to every possible leftist adventure, including when "artists" sunk a crucifix with Jesus Christ in urine and made a painting depicting his mother surrounded by dung. But a celebration of America's armed forces on Independence Day? This was an outrageous waste of taxpayer dollars.

The Post didn't complain about the costs on Aug. 28, 2013, when Rev. Al Sharpton held an event on the same Washington Mall celebrating the 50th anniversary of Martin Luther King Jr.'s March on Washington, featuring speeches by then-President Barack Obama and former Presidents Jimmy Carter and Bill Clinton. No one at that partisan paper smelled a partisan event.

As with Sharpton's event, Trump's address in Normandy only one month ago was nothing like the media's horror-movie premonition. Trump spoke unselfishly about the greatness of America and the bravery of her military men and women. Commentators noted after the event that it was a dramatic recruitment pitch for the military, which has had trouble attracting recruits. It had nothing do with Trump.

How did the press get this so wrong? Obviously, as the Democrats begin trying to select a nominee to prevent Trump's re-election, the "objective" journalists don't want Trump to benefit from incumbency in any way. Thus, a speech honoring our nation on July 4 had to be denounced as a campaign rally. Their loathing of Trump led them to interpret his every tweet bragging about this tremendous forthcoming event as a sure sign it would be all about his ego and not about our history.

He's playing the press like an accordion. They are the campaign issue. They are the ones politicizing current events against the candidate they despise.

You can also blame the Pentagon. In a post-event segment on "PBS NewsHour," Mike Lyons, a Gulf War veteran and a non-resident fellow at the West Point Modern War Institute, complained that the president's critics inside the military "used the media, unfortunately, to get a lot of disinformation out with regard to how the thing was going to go, that general officers weren't happy about it." He lamented, "Their mission was to execute on what the president's vision was." Instead, they kvetched to eager reporters.

Lyons said: "If the Pentagon released a plan that said it was only going to be a couple of static displays of some tanks and some Bradleys and the like, it would have quelled some of the hysteria that took place well beforehand and made this more palatable from the very beginning."

Of course, the cable-news analysts could have surmised the same, but it would have been contrary to the narrative that the Trump Train must be derailed at all costs.