Brent Bozell and Tim Graham
|
Posted: Feb 08, 2019 12:01 AM
Share   Tweet
The opinions expressed by columnists are their own and do not necessarily represent the views of Townhall.com. 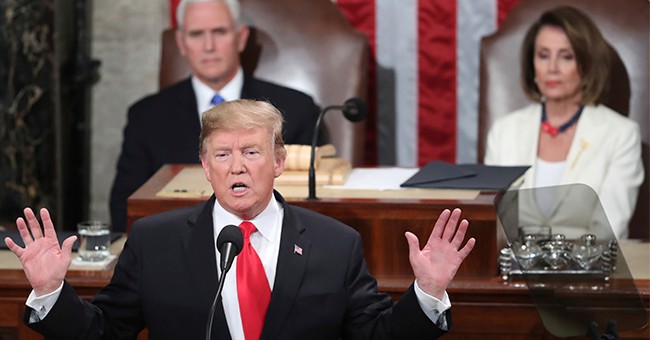 The liberal desire to rebut President Trump is so overwhelming that they're now "fact-checking" him live or the moment he utters his last sentence. There is an Official Democratic Politician Rebuttal of the State of the Union, but why bother? They need only give links to national "news" sites, since the "news" anchors will offer their "context" as soon as the speech is over.

Or better yet, leave it to the "comedians."

One could easily consider the late-night talk shows to be the Democrat rebuttal. Start with "The Daily Show" on Comedy Central, where Trevor Noah quipped, "The real theme of his speech was that we're all going to die, Mexican style. ... This part of his speech was so scary he should have just done it with a flashlight under his chin."

Trump was dismissed as dumber than a fifth-grader. "There was one thing we can all agree on," Noah announced. "He read really well. ... I don't know if he's ready for a second term, but he's definitely ready for the second grade."

ABC's Jimmy Kimmel had the same lame thought. "President Trump spoke with all the elegance of a book report written by a third-grader on the bus," he said. Kimmel was surely angry that he declared the president a grade smarter than Noah.

Kimmel also joked: "Trump said, 'We must step boldly and bravely into the next chapter of this great American adventure.' And that chapter is 11." Bankruptcy, get it? Who needs to tell the truth about the economy? Not the comedians.

CBS' "Late Show with Stephen Colbert" is a hot stop for the 46 or so Democrats considering a run for the White House, and Colbert is trying hard to be the most hateful Trump hater of them all. His post-State of the Union show offered a fake translation of Russian President Vladimir Putin. "Good evening, I'm Vladimir Putin," the female translator said over footage of the real Russian autocrat speaking. "I agree with President Trump's call for unity. Both sides must come together and do exactly what he says. That I told him to say."

Fake Putin then makes this unfunny joke: "We built a wall in Germany, and not one Mexican got into East Berlin." Liberals can never tell the difference between a wall to keep citizens in and one to keep illegal immigrants out.

Colbert then added his own thoughts. "This was not a particularly great speech," he said. "But what it lacked in quality it made up in length. This speech was like watching paint lie." Yes, these "joke" writers get paid for this.

TBS "comedian" Samantha Bee had to wait a night to offer her feckless feminist fusillade. "My ovaries just tried to move back to Canada," she joked about the president's passionate pro-life remarks. "I always knew someday a Republican president would try to take away my right to choose," she said, skipping over the fact that she's almost 50. "I just didn't think it would be the kind of president who's definitely tried to go Dutch on an abortion!"

This isn't new. Last May, she told viewers, "If Trump hasn't paid for at least half a dozen abortions, I will eat this blazer."

Bee was only echoing panicked Hollywood feminists who can't imagine an abortion limit they could abide. Bette Midler tweeted after the speech: "Buy stock in coat hangers! Here we go, 60 years, back to the back alleys!" Alyssa Milano added, "Government doesn't get any bigger than when it is in a uterus."

When you're the Resistance, the counterarguments don't have to have internal logic, and they certainly don't have to be funny. They just need to be loaded with passionate fear and loathing. The cultural elite offers a perpetual geyser of hate.

Hollywood would like America to believe it reflects our nation's pulse. Well, 76 percent of Americans approved of this speech by the second- or third-grader who's destroying our economy as a pawn of Russia because he wants to kill pregnant women.