Brent Bozell and Tim Graham
|
Posted: Mar 09, 2018 12:01 AM
Share   Tweet
The opinions expressed by columnists are their own and do not necessarily represent the views of Townhall.com. 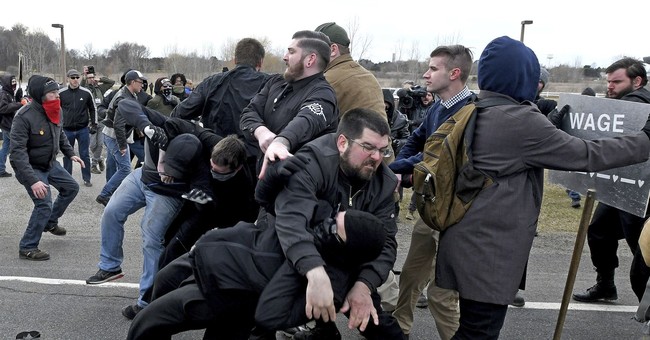 Editor's Note: This column was co-authored by Tim Graham.

Leftists in the Trump era claim to be the guardians of the First Amendment against an allegedly authoritarian president. But over the last few years, leftists have been the authoritarians on campus, squashing speeches by speakers they deem "fascist" and claiming that ideas they don't agree with are somehow tantamount to "violence."

The latest example came from Lewis & Clark College in Portland -- the alma mater of Monica Lewinsky. On March 5, the local Federalist Society welcomed Christina Hoff Sommers, author of "The War Against Boys" and "Who Stole Feminism?"

A gaggle of leftist groups scribbled a letter in which they demanded the college cancel this speaker and her "violence." They claimed, "under the guise of 'open debate' and 'free discourse,' the Federalist Society ... (invited) a known fascist to our campus to encourage what we believe to be an act of aggression and violence toward members of our society who experience racial and gendered oppression."

No members of the public or reporters were allowed to attend, just law school students. When Sommers arrived to speak, the leftists tried to block the entrance to the room. Once the speech began, they prevented Sommers from talking by shouting things like "Microaggressions are real" and "No platform for fascists."

Sommers says Janet Steverson, a law professor and -- paging George Orwell -- dean of "diversity and inclusion" at the school, asked her to "wrap up" her speech and take questions, and said that she only made it halfway through her speech. Halfway is better than not at all.

This "resistance" is happening all over. In October, Seattle University's law school revoked its co-sponsorship of an immigration debate hosted by its chapter of the Federalist Society.

Shortly after that, the Texas Southern University law school canceled a Federalist Society chapter event that was to feature conservative State Rep. Briscoe Cain. Protesters yelled: "No hate anywhere! You don't get a platform here!" and "When a racist comes to town, shut him down!" The college president shut it down, alleging the meeting was not authorized.

No one in the national media covered this week's outrage with Sommers -- except New York Times opinion writer Bari Weiss, in a piece titled "We Are All Fascists Now." Inside The Times, other writers want Weiss removed. They can't have "neocons" on staff.

Instead, papers like the Washington Post prefer covering speeches by actual neo-Nazis. On March 6, it was covering Richard Spencer's speech at Michigan State University -- due to legal challenges, it was allowed to go on, although attendance was very poor, and it was scheduled during spring break to minimize disruption. Nevertheless, the Post wrote almost 1,000 words on this fiasco. It began: "Fights broke out between white supremacists and protesters Monday as anti-fascist activists, students and community members converged in and around Michigan State University to counter a speech by white nationalist Richard Spencer."

Everywhere these racists go they draw more protesters than supporters.

This sentence perfectly summed up the left: "Josh Lown, a protest organizer and graduate student at Michigan State, said midday Monday that they were hoping to avoid violence while disrupting Spencer's appearance as much as possible." Even so, protest organizers "posted an image on social media playing off the university's 'Spartans will ...' campaign, showing a still from a video of a man punching Spencer."

Conservatives cannot and will not accept lectures from the left about "democracy dying in darkness" while it shuts down -- or beats up -- people it doesn't like.