Brent Bozell and Tim Graham
|
Posted: Jul 05, 2017 8:21 PM
Share   Tweet
The opinions expressed by columnists are their own and do not necessarily represent the views of Townhall.com. 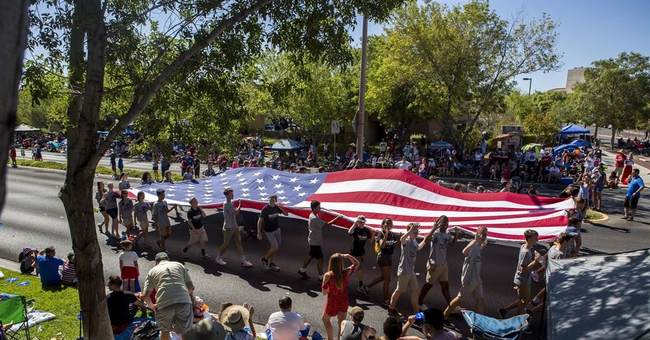 Polls out for Independence Day hit a sobering note: Our patriotic feelings are on a steady decline. Gallup found the number of people describing themselves as "extremely proud" Americans has dropped from 70 percent in 2003 to just 52 percent in 2016. Just 34 percent of Americans ages 18 to 29 picked "extremely proud."

Could the days of "Morning in America" be over? Is Ronald Reagan's vision of a nation's embrace of her exceptionalism a thing of the past? There is no question that we are headed in the wrong direction.

American exceptionalism is on trial, and one man is pleading for her to regain her senses. Mark Levin's new runaway best-seller, "Rediscovering Americanism," somberly argues that the American experiment is over if the "tyranny of progressivism" is not defeated. The surveys showing such a dramatic decline in patriotism, especially among the young, indicate that the progressives are succeeding. Levin is calling for America to rekindle her exceptionalism -- a belief in the inalienable rights of man and the preservation of a system of ordered liberty through the rule of law.

This is exactly the discussion the country should be having. It's also a discussion a big swath of America wants to have. Huge crowds are coming to Levin's book signings, and they're selling like hotcakes.

Levin is correct to argue that our educational institutions, including the media and Hollywood, want everyone to accept that the progressives have won, and he'll have none of it. "Rediscoving Americanism" is a cogent plea to reject a federal leviathan, an all-encompassing administrative state, and return to a limited government based on the firm ground of the Constitution. It's a trumpet blast for liberty.

Levin is offering precisely what progressives fear most: independent thought. In the age of liberal fascism, conservative ideas and conservative authors will not be allowed access to the airwaves -- including the taxpayer-funded TV and radio stations. They call themselves the "mainstream" media and preach the gospel of tolerance, but on both counts, the progressives are frauds.

They will allow a discussion of public policy -- as long as it matches their worldview. Think Sen. Al Franken. He is no Mark Levin intellectually, but that's irrelevant. His book came out a few weeks ago, and he was the progressives' toast of the town, celebrated all over "news" shows, "public" TV and radio, and late-night comedy shows. The Washington Post and The New York Times rolled out 1,300-word rave reviews.

But once again, Levin is being shunned by the thought police. Witness that though it's a runaway best-seller, now seven weeks consecutively, the establishment media have censored him completely, with not a single interview granted.