Brent Bozell and Tim Graham
|
Posted: Nov 25, 2016 12:01 AM
Share   Tweet
The opinions expressed by columnists are their own and do not necessarily represent the views of Townhall.com. 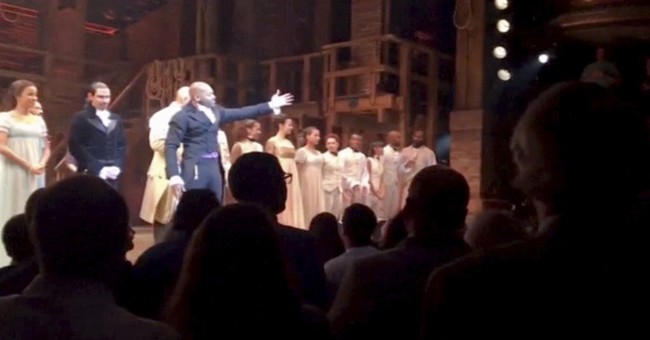 Vice President-elect Mike Pence was in New York during the transition, and he took his family to Broadway to see "Hamilton," the hot hip-hop Founding Fathers musical that people are overpaying to see. What resulted wasn't exactly surprising -- rude and obnoxious, but not surprising.

Pence entered the Richard Rodgers Theatre to both cheers and boos, which is unsurprising for national politicians at public events, especially sporting events. But during the curtain call, Pence was singled out from the stage.

Actor Brandon Victor Dixon, who plays Vice President Aaron Burr, lectured the vice president-elect, saying: "We, sir, we are the diverse America who are alarmed and anxious that your new administration will not protect us -- our planet, our children, our parents -- or defend us and uphold our inalienable rights, sir. But we truly hope this show has inspired you to uphold our American values and work on behalf of all of us."

Can anyone imagine Broadway actors singling out a Democrat after a show to proclaim their alarm and anxiety over an election result? That's why you dismiss the absurdity that this "diverse America" of hard-left theatre people represents anyone outside of the ZIP code in which they perform.

Then it came out that Dixon and other "Hamilton" stars haven't voted in years. So much for the alarm and anxiety they've been feeling about the country. It's yet another reason to reject the pleadings of the elites who cannot conduct even the most basic exercise in the democratic process -- voting -- and yet demand their voices be respected.

Pence knew going in that "Hamilton" has become some kind of a "Rocky Horror Picture Show" crowd-participation event for Trump-hating liberals who cheer wildly at the musical's lyrics that boast about how much immigrants can do. Pence knew going in that the "Hamilton" folks hosted a fundraiser for Hillary Clinton's presidential campaign in July -- touted by "news" media as a "boost of Tony-winning star power" -- with ticket prices ranging from $2,700 to $100,000.

So who was reflecting a tolerance of diverse views, and who was ranting inside a bubble?

The controversy took off when Donald Trump tweeted that Pence was "harassed" in the lecture and deserves an apology. "Hamilton" fans insisted the lecture was polite. It wasn't.

Then The New York Times lectured from a half-mile away that this protest speech represented "American principles like free speech, respect and the ability to challenge authority in the Trump era." Now that is just hilarious. Lecture or heckle Pence, and you represent free speech. Lecture or heckle President Barack Obama, and the Times insists you represent white people's rancid failure to accept a black president.

It's going to be a long four (or eight) years of the usual arrogant liberal mockery from the entertainment elite. On the American Music Awards, 21-year-old supermodel Gigi Hadid was hailed by liberal media elites for a bad Melania Trump impression in which she repeating the tired Michelle Obama-plagiarism joke.