Brent Bozell and Tim Graham
|
Posted: Jun 03, 2016 12:01 AM
Share   Tweet
The opinions expressed by columnists are their own and do not necessarily represent the views of Townhall.com. 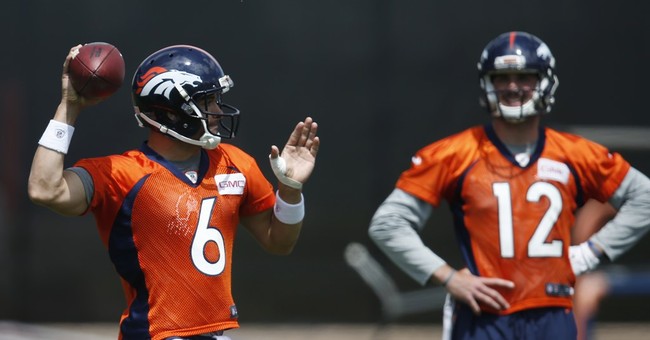 Football and its most powerful organization, the National Football League, have faced a serious public relations problem regarding concussions. The NFL settled a massive class-action lawsuit brought by former players (and now, another former player is suing). Retired NFL star Junior Seau committed suicide, and was later found to have shown abnormalities associated with chronic traumatic encephalopathy.

Seau shot himself in the chest in 2012. Afterward, his family agreed to have his brain studied. Hollywood signed up Will Smith to dramatize the story of concussions in the NFL in the movie "Concussion," which chided the American love of football. The NFL is "a corporation that owns a day of the week," quipped Albert Brooks, playing forensic pathologist Dr. Cyril Wecht, "the same day the church used to own."

This is a real problem for the NFL. A former NFL safety, let's call him B, had a lengthy and distinguished career. He is also a friend. We spoke with him recently about this. He told us he suffered two concussions, possibly more. "How serious is the problem?" we asked. His answer was wholly unexpected, and jarring. "If I knew then what I know now, I wouldn't have played in the NFL." This from a natural athlete who obviously loved his craft.

Count on the flower children at National Public Radio to go over the edge with this issue. The problem isn't the size and strength, and therefore, the power of professional football players. No, it's -- ready? -- the evil game of football itself.

This is your taxpayer-funded broadcasting in action: Planned Parenthood allegedly selling dead baby parts is just a "women's health" group aiding "medical research," but the NFL is organized savagery.

It's true that America loves not just the speed and grace of the game on offense, but the noisy crunch of the game on defense. Surely, the "savage" nature has increased over the years along with the size and speed of the players on the gridiron. But no one in America is rooting for brain injuries and suicides. It's insulting even to think this.

The left has it out for professional football. Its partisans tried a few years back to give the NFL a permanent black eye with the violent off-the-field domestic violence offenses of NFL running backs Ray Rice and Adrian Peterson, as if their horrible behavior is the norm in the sport. For the past 15 years, there's been an organized campaign to strip the Redskins from Washington, though it's leftists, not Native Americans, who are upset. Now, some are using the concussion controversy to talk parents out of letting their children play football altogether.

Deford was encouraged into this commentary by Buffalo Bills General Manager Doug Whaley, who told a radio station, "It's a violent game that I personally don't think humans are supposed to play." He said: "All I could think of was the late comedian Flip Wilson whose favorite punchline was a screech, 'The devil made me do it!' Thank you, Satan, I thought."

He finished with the same satanic shtick: "Notwithstanding, whether the damage to the players or the pain they endure -- which I was privileged to suffer once, but for a few seconds -- we Americans will not stop adoring football. The devil must make us do it."

This is not the first time Deford has used his NPR perch to trash the game in the most self-righteous terms. In 2013, he talked up getting the kids to drop playing football: "What we're seeing now in football is a definition of manliness that is uber-macho. To be that kind of a man, you must be mean and insensitive," Deford preached. He continued, saying, "modern football is so violent, even thuggish, that it can damage your soul as well as your brain."

Once the anti-sports lecture is over, NPR is on to the next "nonviolent" crusade: encouraging the joys of "gender confirmation surgery" (don't call it breast and genital amputation) so that transgendered Americans can feel like their "true selves."