Brent Bozell and Tim Graham
|
Posted: Mar 09, 2016 12:01 AM
Share   Tweet
The opinions expressed by columnists are their own and do not necessarily represent the views of Townhall.com. 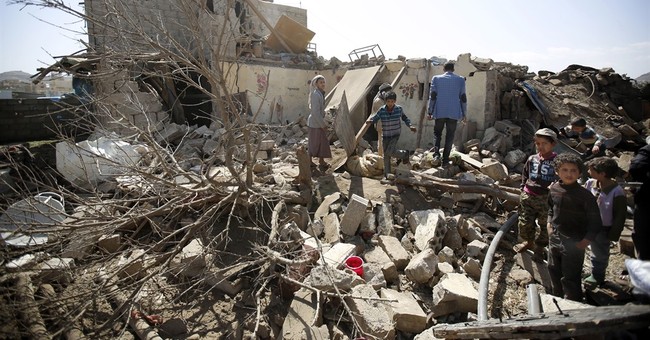 It's part a lack of resources overseas and part simple disinterest at home, but the American news media seemingly are out of the business of covering international news. For example, one of the most neglected international stories is the attempt by ISIS to exterminate and persecute Christians.

Instead, our media obsess over the faintest hint of domestic "Islamophobia." A few weeks ago, The New York Times filed a national story from Arizona with this incident: "Rania Kanawati, a Syrian immigrant, was walking to her car after Friday Prayer last month at the Islamic Center of Tucson when a beer can landed right behind her, then another one fell by her side." The headline was "University of Arizona Students Hurl Insults, and Litter, at Mosque in Tucson." No one was hurt.

At about the same time some Christian in the Middle East was probably being crucified, or set on fire.

On March 4, the Associated Press reported, "Gunmen in southern Yemen on Friday stormed a retirement home run by a charity established by Mother Teresa, killing 16 people, including four Catholic nuns." Network coverage? Zero on ABC, CBS, NBC, PBS, NPR, CNN, MSNBC and Fox. At least The New York Times offered a story, although The Washington Post could only offer 94 words.

Pope Francis was right when he stated that "they were killed by their attackers, but also by the globalization of indifference."

Pressure is now mounting on the Obama administration to declare Christians as genocide victims of ISIS, an amazing thought given there is no question but that it is underway. Just ask any Christian denomination represented there. All will speak to it. Yet this administration hasn't yet decided it is. What else might it be? More "workplace violence"?

On March 2, the House Foreign Affairs Committee unanimously passed a genocide resolution, becoming the latest body to call for a formal recognition of ISIS actions as genocide. Under the omnibus spending bill passed in December, the State Department has until March 17 to speak on a declaration of genocide. But this isn't a news story, either.

If the U.S. government officially declared that genocide was taking place against these minorities, it would put further pressure on the United Nations Security Council to issue a similar declaration. That could lead to trying perpetrators in the International Criminal Court.

Presidential candidates Ted Cruz, Marco Rubio and Hillary Clinton have joined this effort, but Team Obama must need to be dragged, kicking and screaming. White House press secretary Josh Earnest sounds like a defense lawyer when asked. "My understanding is that the use of that word involves a very specific legal determination that has, at this point, not been reached," he explained. Two days earlier, testifying before the House, Secretary of State John Kerry also insisted "additional evaluation" would be needed before calling ISIS persecution a "genocide."

In 2014, Kerry said "ISIL's campaign of terror against the innocent, including Yazidi and Christian minorities, and its grotesque and targeted acts of violence bear all the warning signs and hallmarks of genocide." Somehow, against all the evidence, Kerry is backsliding.

How can it be that our media are so quick to condemn America's pluralism and freedom of religion as shamefully inadequate, while they hold ISIS and other Muslim persecutors to no standard at all?