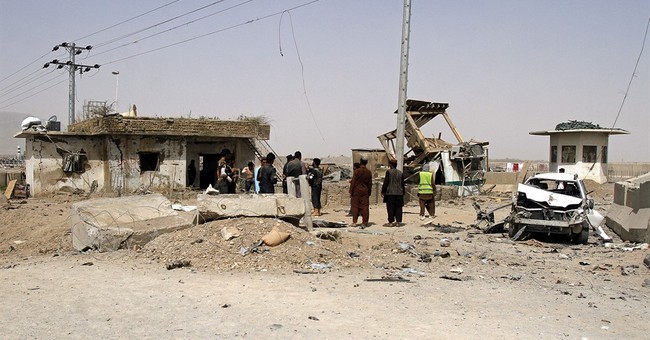 They call it "bacha bazi," translated as "boy play" -- Afghan militia men throwing boys into sexual slavery. What's worse yet, the U.S. military has turned a blind eye to this obscene practice. The front page of The New York Times carried the headline "US Soldiers Told to Ignore Sexual Abuse of Boys by Afghan Allies."

Soldiers who tried to stop this abuse act have been punished by the U.S. military. A photo caption read: "Dan Quinn was relieved of his Special Forces command after a fight with a U.S.-backed militia leader who had a boy as a sex slave chained to his bed." Quinn beat up the abuser.

Given the media's obsession with all things anti-military and anti-sexual abuse of boys, you'd expect a coverage stampede. Except for one thing.

Terry Mattingly at the media site Get Religion observed that the Times piece itself had a "massive, gaping hole." Islam was left out, with bland sentences like "the American policy of treating child sexual abuse as a cultural issue has often alienated the villages whose children are being preyed upon."

Mattingly asked "How can the world's most powerful newsroom address this topic without (a) mentioning Islamic law and (b) discussing whether or not these U.S. policies are actually helping the Taliban?"

This story deals directly with Islamic culture, so this scandal was a public-relations problem that might please "Islamophobes" and Obama critics, meaning it's dead on arrival. It's obviously a more serious human-rights abuse than the barking-dog scares and naked pyramids of Muslim prisoners at Abu Ghraib, which the media exaggerated into a massive scandal in 2004, with the obvious hope of ruining President Bush's chance for re-election.

Besides, who cares when the victims in this case are compassionate American servicemen?

But there's more than the double standard in the treatment of U.S. presidents. There's the double standard in covering religious faiths. On the night Pope Francis arrived in America at Andrews Air Force Base, the "PBS NewsHour" aired an almost 10-minute report pounding away at a controversy over a single priest's sex abuse in Minneapolis in the last few years.

The military's blind eye toward "boy play" was also reported on PBS -- for two sentences lasting 14 seconds. It was a bland denial of the military's disinterest in child sexual abuse, systematic abuse that's going on right now, and being officially tolerated by our government.

It's just like the recent child-rape scandal in Rotherham, England. The British press discovered at least 1,400 children, some as young as 11, were groomed for sexual exploitation and rape (even gang rape) while the authorities looked the other way -- from 1997 to 2013. The abusers were Muslims. The American press -- even most newspapers -- looked the other way, too.

It's hard to avoid the conclusion that secular American journalists have the same mysterious affinity for and defensiveness toward Islam that the president does. And just like Obama, they consider the Catholic Church and its clergy and laity to be an obstacle to their leftist agenda. They find sex-abuse scandals to be effective tools in the culture war -- their culture war.

It's unlikely Pope Francis would use this trip to denounce the American media for their transparent double standard, and their shocking apathy for child sex abuse when it might sound "Islamophobic" or "racist" to object. But anyone who cares about media fairness and childhood innocence should.