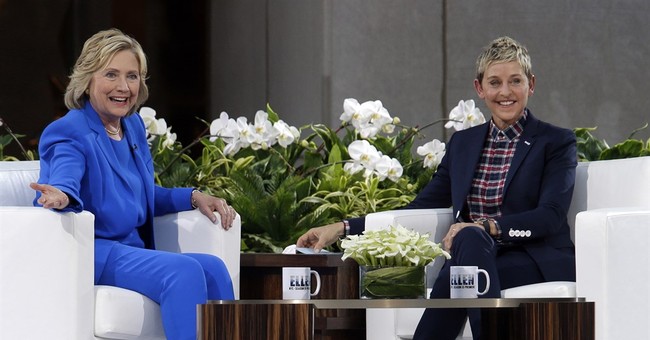 Trending
Ellen DeGeneres is a comedian as well as a daytime TV star. Apparently she deployed both those talents when she said this with a straight face in January: "I don't have an agenda. I'm not here to brainwash anyone. ... The only way I'm trying to influence people is to be more kind and compassionate with one another. ... That is the message I'm sending out."

In reality, Democratic politicians regularly use her program to promote themselves and their agenda. President Obama's appearance to promote Obamacare is one of countless examples. Ellen booked a big star for her first week of the fall season, Hillary Rodham Clinton, and gushed all over her about how she was the only choice for president.

Clinton's critics also rolled their eyes when Ellen sat across from the woman who recently compared Republicans to terrorist groups and claimed "I hate the 'us and them.' I don't like that someone is a Republican, so they're bad. They're a Democrat, so they're bad. I want inclusive. I don't want exclusive, I want everyone to get along."

Despite claiming "I don't like politics," Ellen sounded like James Carville when the conversation turned to what's sinking Hillary in the polls: the scandal over her private email server during her time running the State Department.

Ellen insisted Clinton didn't need to answer any troublesome questions. She went straight to the talking points. "They have not found a thing. They keep saying they've found something, but then we don't hear anything about it. So they haven't found anything." Then she complained that "women are held to a different standard than men. We are held to a different standard for our weight, for our age, for our looks, for everything. Which is not fair because you are the smartest, most qualified person for this job."

Someone should tell Ellen that the feminists (Clinton included) never rushed to the defense of Secretary of State Condoleezza Rice, and no one suggested people were overly critical of her because women are held to a tougher standard. She was routinely treated like a stooge of George W. Bush.

Ellen also dismissed the idea that Clinton is too old to win: "They're saying that if you are elected you would be one of the oldest presidents elected, which -- does that matter? Don't we want experience more than anything? Isn't that important?"

That's the kind of hardball Ellen throws at her favorites.

Clinton also drew this kind of gush from NBC late-night host Jimmy Fallon on the night of the second Republican debate. "The two leaders over there in the Republican Party, one is a real estate mogul. The other guy is a neurosurgeon." Fallon touted her resume: "You were a senator, you were first lady, secretary of state. Is it possible that you have too much experience to become the president of the United States? Is that possible? They have no experience!"

The Clinton campaign, like the past two Obama campaigns, and the Clinton effort that preceded them will heavily exploit these Hollywood-left chat shows in a way Republicans cannot, trying to "humanize" the robotic Clinton. But voters still characterize her as cold, dishonest and untrustworthy. Not even Ellen is changing that.