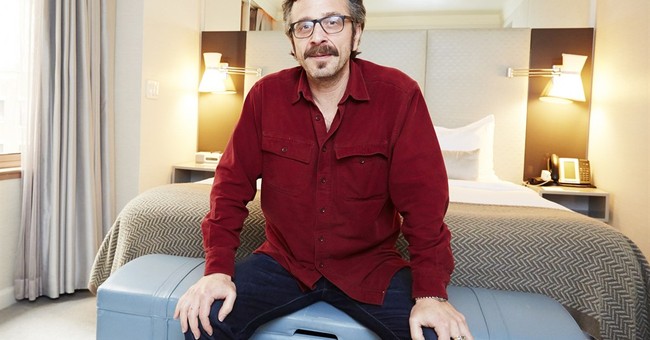 Trending
Marc Maron is a stand-up comedian and radio host in Los Angeles. Hipsters love his podcast, mostly interviews with other comedians, which he titled "WTF." On his website, the merchandise includes a coffee mug that says "Pow! I (soiled) my pants." You can understand why he was shocked President Obama wanted to grant him an interview.

As for Obama's tastes, and his devotion to the decorum of his office, nothing shocks us. He has neither.

Eleven years ago, Maron was an original crew member on the leftist radio network Air America, where he hosted a show he called "Morning Sedition." They were filled with certitude that they would overtake The Rush Limbaugh Show with their snobbish liberal comedy. It belly-flopped, then sank.

His idea of funny was going on Bill Maher's show and joking about having violent sex with Michelle Bachman. You can really understand why the Obama interview was a surprise to him. He'd never admit it, of course, but we suspect even he considered Obama would have better judgment.

This choice was not so shocking for Obama. He seems allergic to the establishment press, as sycophantic as it is, because he cannot control them. He prefers one-on-one interviews with leftists that quiver in his presence. Maron admitted he was one of these people, and even admitted he cried a little when Obama was gone and the experience was over.

Another Obama robot was born.

Afterward, Maron told NPR's Terry Gross that Obama is "a pretty amazing person" with a "a sort of personal power or magic. ... It's a rare thing." He was amazed to "be in the presence of somebody who is the president and has been for eight years (sic) and to wonder: What is that gift? How does just a person do that? And to feel the incredible sort of charisma and ease at which this guy handles himself."

He proclaimed, "You've gotten an amazing amount of stuff done, and in a time in the last year, you got some big stuff done where people didn't think you were going to get anything done."

Someone should ask Maron if he'd been smoking something.

He also expressed wonder: "I mean, you had a Congress that was, you know, dead set on not giving you anything. And then, you know, then it got to a point where they really -- even if they wanted to work with you, they couldn't." Obama agreed: "That's exactly right. They had their constituents all stirred up." Maron replied: "They thought you were Satan. ... It's fascinating to me that you were able to maintain this hope."

Obama must drink in this kind of interview like a refreshing summer brew.

It's interviews like this where you just shake your head at liberals who rail against Fox News, asserting that the people who they imagine are Satan -- like Ted Cruz or Dick Cheney -- receive sympathetic interviews. But that's exactly what Obama gets from an NPR or a "WTF" -- which unsurprisingly, is made available to NPR stations. In fact, the gush is measurably worse. It might be hard to recall a Fox News anchor oozing that Dick Cheney has a "personal magic."

There aren't many places in the media where Obama can still enjoy his followers sounding like the Kool-Aid drinkers of 2008. You can expect Obama to seek them out and exploit them.