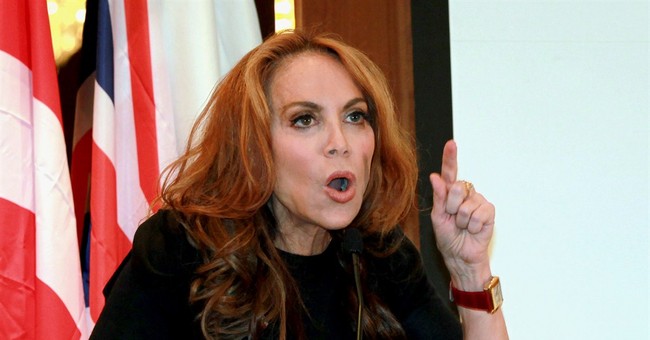 Trending
Liberals claim to be the world's boldest defenders of freedom of expression, which is, of course, nonsense. Here's another canard: Liberals also claim to be the most offended against anyone "blaming the victim." What liberals possess is an ideological system which identifies favored groups as victims and supports squelching the free speech of anyone challenging them.

One of those favored groups is Muslims. Over the weekend, the American Freedom Defense Initiative held the Muhammad cartoon contest in Dallas, obviously a provocative event. But it wasn't meant to result in two Islamic extremists showing up with assault rifles, later shot to death by police after they opened fire.

Two men identifying as ISIS have now attacked America -- in our homeland. So how did the press respond? Liberal journalists deplored AFDI's exercise of free speech and blamed the targeted victims for the attack.

Within hours, ABC described AFDI as "notorious for its anti-Islamic views." The shooters were not "notorious," the shooting targets were. On the Monday evening news, all three "objective" networks were repeating a leftist group's highly emotional "hate group" designation.

"It happened at a Dallas suburb where a group [that has been] labeled an anti-Islamic hate group was holding a Prophet Mohammad cartoon contest," announced NBC anchor Lester Holt.

Washington Post national reporter Lindsey Bever wrote a highly negative article labeling AFDI leader Pamela Geller as an "incendiary organizer" of a Muhammad cartoon contest. The Post, too, went to that same highly emotional leftist source for a smear. Geller was labeled the "anti-Muslim movement's most visible and flamboyant figurehead." In addition, "She's relentlessly shrill and coarse in her broad-brush denunciations of Islam and makes preposterous claims."

On MSNBC, Chris Matthews blamed AFDI for "causing" or "provoking" the shooting. NBC terrorism analyst Evan Kohlmann even claimed they were not holding a free-speech event: "These people are not standing by that principle; they're standing by the principle of hatred for other people. That's their guiding light. That's what they do. They are intentionally trying to provoke a response from the Muslim community."

This spin is obnoxious and offensive. By this standard, MSNBC spends most of its waking hours operating on the "principle of hatred of other people," people who define themselves as conservatives.

Activists like Geller and her partner Robert Spencer are making a provocative point about how free speech is being uniquely curtailed out of sensitivity to Muslims, who apparently "earn" this sensitivity by being violent or making threats of violence. Liberals and their media outlets have no such sensitivity toward Christians or Jews.

Freedom of speech, not religious sensitivity, was the mantra for the media when the National Endowment for the Arts subsidized the maker of "Piss Christ" in the 1990s, as it was when museums hosted Chris Ofili's dung-spattered "art" work on the Virgin Mary, as it was when the National Portrait Gallery promoted a video of a crucifix with ants crawling over the body of Christ.

But freedom of speech for criticizing Islam? There's apparently no room for that in America. They won't even show the cartoon.

And who was their source, anyway? The Southern Poverty Law Center -- yes, that group that has also labeled the Family Research Center a "hate" group for supporting traditional marriage, leading to an assassin using their "hate map" to go to FRC's building and open fire, seriously wounding a security guard, with the intent to kill as many staff as possible, before being subdued.

The leftist media know that. And still use SPLC as their source.

L. Brent Bozell III is the president of the Media Research Center. Tim Graham is director of media analysis at the Media Research Center and executive editor of the blog NewsBusters.org. To find out more about Brent Bozell III and Tim Graham, and read features by other Creators Syndicate writers and cartoonists, visit the Creators Syndicate Web page atwww.creators.com.