The Golden Globes of Propaganda 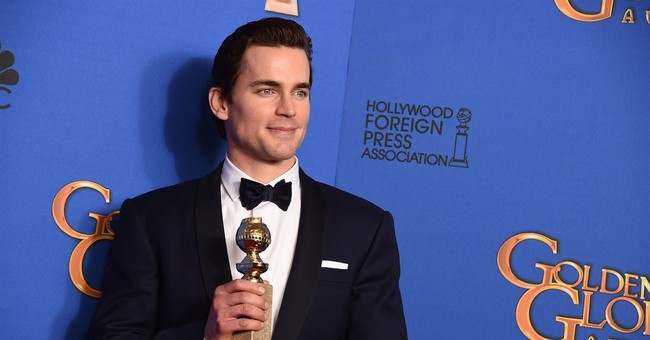 When the Golden Globe awards telecast was over, the Gay and Lesbian Alliance Against Defamation proclaimed, "It was a great night for LGBT-inclusive television." They could have added: "We run the joint."

Gay actor Matt Bomer thanked his "husband" and his surrogate sons when he won an award for HBO's Reagan-bashing AIDS drama "The Normal Heart."

But the bigger celebration came with a best actor award to Jeffrey Tambor, who plays Mort, a 70-year-old father of three who decides he's a woman named Maura in a show called "Transparent," or literally, "Trans Parent," since his three adult children have to figure this whole scene out. The show "airs" on Amazon.com.

The announcer on NBC said not only was this Tambor's first Golden Globe, but his first nomination, which came as a surprise, since he acted in critical favorites like "The Larry Sanders Show" and "Arrested Development." Apparently, you go "full transgender" to get noticed.

In the strange bifurcation of Golden Globes judging, "Transparent" was a "musical or comedy," even though this show is deadly serious about its politics. Series creator Jill Soloway appears in supportive articles with headlines like "Jill Soloway Is Ready To Topple The Patriarchy."

When "Transparent" won for best "comedy" show, Soloway paid a similar tribute. "I want to thank the trans community. They are our family. They make this possible. This award is dedicated to Leelah Alcorn and all the trans people who died too young." Josh Alcorn, who decided he was "Leelah," recently walked in front of a semi-truck on an interstate highway in Ohio because his Christian parents weren't "inclusive" enough about his gender confusion.

The teenager left a political suicide note, published in People magazine: "The only way I will rest in peace is if one day transgender people aren't treated the way I was. Fix society, please."

Soloway unleashed a new word in conclusion. "And it's dedicated to you, my trans parent, my 'Moppa.' You're watching at home right now. I just want to thank you for coming out, because in doing so, you made a break for freedom, for your truth. You taught me how to tell my truth and make this show, and maybe we're going to be able to teach the world something about authenticity, and truth, and love."

The leftist website Mic aptly summed this up as "a powerful message about the meaning of art, and how art can foster social change and human progress." The Hollywood Foreign Press Association was handing out "Fix Society, Please" awards.

For the other 99.9 percent of us who think gender isn't just "assigned" at birth, it's a biological reality, we apparently must be taught that we don't believe in truth, love or authenticity. When we don't accept the "inclusive" demands, like Josh Alcorn's grief-stricken parents, we deserve death threats on the telephone.

For religious folks, now in the bull's-eye, this is a small part of what Pope Benedict was saying when he warned of the "dictatorship of relativism." He said, "the more relativism becomes the generally accepted way of thinking, the more it tends toward intolerance. Political correctness ... seeks to establish the domain of a single way of thinking and speaking."

Anyone who refuses to accept that topsy-turvy world must be "fixed." Hollywood always volunteers.