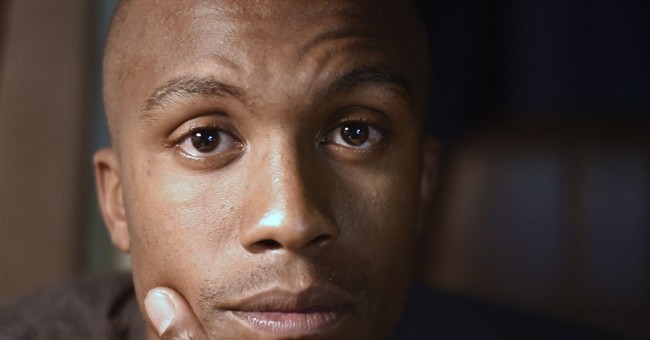 The "No More" TV advertisement blitz against domestic violence by professional athletes is obnoxious and reeks of political correctness. Exactly why does the public need to be indoctrinated about this, as if the audience for "Monday Night Football" is to blame? It's another reason to stop watching this sport.

But there is another reason to be opposed to this clearly political pressure campaign. In the current atmosphere, where even accusations of abuse are toxic public relations, what happens when a pro is falsely accused?

Consider the story of Dante Cunningham. Six months ago, the Minnesota Timberwolves basketball player drove into his driveway in Minneapolis at 4 in the morning. Waiting for him were the police, who immediately put him in handcuffs. He was accused of beating the girlfriend he'd been living with for eight months, Miryah Herron.

Herron told police Cunningham kicked in the door to their bedroom, choked her and slammed her head against the wall. Cunningham says he kicked the door in more than a week before that to retrieve keys he accidentally locked in the room. He insists the only time he touched Herron was when he grabbed her wrist to get her to stop hanging on his truck as he drove away to cool off.

Cunningham was arrested again three days later after Herron told police he violated a protection order by calling her from his hotel room and sending threatening messages on Skype. A police investigation found phone records from Cunningham's hotel showed he made no outgoing calls, and surveillance cameras indicated he never left his room until police came to arrest him.

They found Herron sent the messages herself to frame Cunningham.

Now, the 27-year-old Cunningham is a former NBA player. The charges were dropped and police concluded Herron fabricated the allegations against him. But Hennepin County Attorney Mike Freeman, a liberal Democrat who twice failed to get his party's nomination for governor, won't charge Herron with filing a false police report. He told the AP he feared "a chilling effect" on future victims of domestic violence.

Freeman doesn't care about the "chilling effect" on Cunningham's reputation. "At this point it's about justice and it's about clearing my name," Cunningham told the AP. "Clearly this adds a terrible stigma to my name. ... Now when anyone looks up Dante Cunningham, 'Oh, wasn't he the one that was in trouble?' There's nothing out there saying there was a false charge."

Cunningham is no Kobe Bryant. Bryant was a superstar when he was accused of sexual assault in 2003. The matter was dropped when the accuser wouldn't testify at trial a year later. Despite the loss of endorsements and having to admit he cheated on his wife, Bryant was never in danger of falling out of the NBA. Cunningham is a role player, someone who's merely a roster option.

As the NBA season begins, his agent, Joel Bell, estimates he could have landed a deal paying him more than $4 million a season. He said one team recently told him they couldn't risk the P.R. nightmare that could come from signing him.

Attorney A.J. Delgado put it best at National Review: "One would think the Left, so-called champions of civil liberties, would be disturbed by the trampling -- or outright non-existence -- of due process in these cases. Or, from an alternative angle, one would think the Left would be concerned that the men victimized by false domestic-violence or rape charges are often black males. ... But the Left is not. In the rock-paper-scissors tournament of modern-day liberalism, pushing the notion of domestic violence as an epidemic trumps both civil liberties and racial-disparity concerns."

Liberals love making movies about the blacklisting of Hollywood screenwriters in the fifties, but they're failing to notice today's reality of an athlete being blacklisted for fear of a "chilling effect" on domestic-violence accusers.