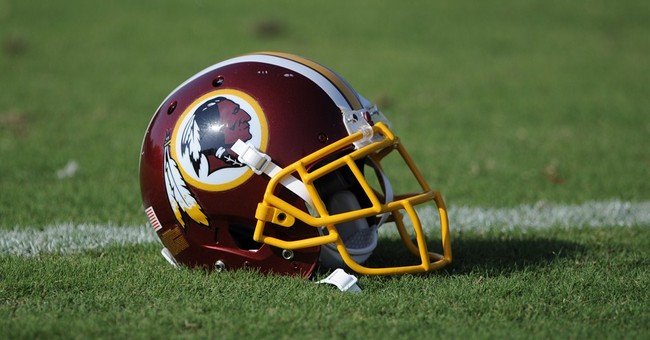 The U.S. Patent and Trademark Office found its way to the front page by declaring the word "Redskins" was offensive and therefore unworthy of trademark protection under a 1946 law that proscribes trademarks for "immoral, deceptive, or scandalous matter."

MSNBC anchor Joy-Ann Reid reported this news with an obscenity warning before airing a clip of Sen. Harry Reid: "And I just warn people, he does use the name of the team. So, I'm just going to warn you guys about that in advance." She's not alone. Liberal sports writers refuse to type the word in their columns.

Welcome to the latest controversy where the left, which has removed every moral objection to traditional understandings of profanity, continues its own crusade to ban words that violate their sensitivities on race, gender and sexual preference. A quick review of the PTO's record shows this was an overtly political decision -- surely aimed at or requested by the White House. Why?

Try to find an example in eight years of the George W. Bush presidency where the PTO made a controversial decision about an allegedly offensive trademark. It's nowhere to be found in the Washington Post archives, and certainly not touted on its front page and at the top of the editorial page, as this was, as a "victory for tolerance."

So are we to believe that with a new regime calling the shots, the PTO has cracked down on racially charged names? Well ... no. Last summer, it approved the phrase "Dago Swagg," despite the insult to Italian-Americans, as well as "Uppity Negro." Where "racial" is concerned, it depends on what "is" is.

The PTO found insufficient evidence that the term "Cumbrella" for condoms was scandalous, while refusing other variants of the term. "Big Pecker Brand" was approved, since it came with an illustration of a bird with a large beak, giving it an "alternative, nonvulgar meaning."

Also approved were "Old Glory" condoms, complete with the flag in the shape of that item. The maker pitched it as patriotic, not offensive. The back of each package carried an "Old Glory Pledge" that "We believe it is patriotic to protect and save lives." The agency agreed that the company's brand sought to "redefine patriotism to include the fight against sexually-transmitted diseases, including AIDS."

Drug use isn't controversial. "Cokaine" is a registered trademark, and "Cocaine" has been approved for several companies over the last 20 years. So was "Paris Heroin," registered from 2003 to 2010. Even "God Loves Marijuana" was registered for shirts and hats in that same time frame.

The left doesn't oppose disparaging terms when the cause is leftist. "Dykes on Bikes" was successfully registered by lesbian "pride" activists in 2007. A woman named Ava Watkins received approval for a "Twatty Girl" trademark for caps, jogging suits and women's underwear.