Brent Bozell and Tim Graham  |  Jan 09, 2013
The opinions expressed by columnists are their own and do not necessarily represent the views of Townhall.com.
Top Columns
Trending on Townhall Media 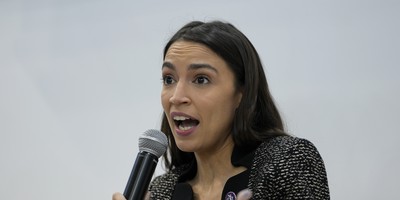 AOC Is Under Investigation by the House Ethics Committee Katie Pavlich
The liberal media have spent 12 years feeling sorry for Al Gore. The Man Who Should Have Won in 2000 has had megatons of positive publicity dumped on him, hailing him as the "Goracle." They cheered as leftists honored him with the Nobel Peace Prize and gave an Oscar to his filmed eco-sermon, "An Inconvenient Truth."

So when Gore sold his left-wing cable channel Current TV to Al-Jazeera for $500 million, where were they? Despite the fact that conservatives thought the deal sounded like a ridiculous April Fools' joke, the networks had nearly nothing to say. ABC skipped it entirely. CBS and NBC offered a perfunctory sentence on a couple of newscasts.

These networks might argue this was not an Earth-shattering business event given the puny size of Current's audience, which is true. At about 42,000 viewers during primetime, the nationwide audience could fit inside the Washington Redskins' Fedex Field and still leave the stadium half-empty. It's about one-fiftieth of the audience TLC gets with "Honey Boo Boo." Of about 96 cable channels that are publicly rated by Nielsen, 93 of them have higher ratings than Current. It is a Nothing Network.

But the controversy is not about ratings. It's about one network selling itself to another best known for vicious anti-American propaganda. Al-Jazeera is not buying Current for the potential profits. Surely, they'll shut the old channel down. They want the cable slots to push their poison in American homes.

In 2006, CNN's Frank Sesno interviewed Al-Jazeera talk show host Riz Khan and asked if the terrorist group Hamas should be designated as a terrorist organization. "I'm not one to judge," Khan replied. What about Hezbollah? Khan answered: "Same thing, you know, I'm not going to judge."

There are other signs of disturbing pro-Islamist bias. In the midst of the "Arab Spring" celebrations in Cairo's Tahrir Square on Feb. 11, 2011, some 200 men sexually assaulted CBS correspondent Lara Logan. Al-Jazeera English, which was credited by Hillary Clinton and other liberals for its ubiquitous coverage of the uprising, deliberately ignored the assault on Logan. When they were called out by Washington Post columnist Jonathan Capehart, Al-Jazeera English publicist responded that the network "believes as a general rule" that journalists "are not the story." Capehart then noted that just days before, Al-Jazeera touted a story on how "Domestic and foreign journalists have come under siege amid the turmoil in Egypt."

Then there's the case of honoring Lebanese terrorist Samir Kuntar. In 1979, Kuntar was imprisoned for shooting an Israeli civilian in front of the Israeli's 4-year-old daughter, and then bashing in the little girl's head with his rifle. In 2008, Al-Jazeera in Qatar threw a televised birthday party for Kuntar, then newly released in a prisoner exchange. An Al-Jazeera interviewer told Kuntar, "You deserve even more than this," then brought out cake and sparklers. The cake had pictures on it, and Kuntar declared the "most beautiful picture" on the cake was of Hassan Nasrallah, the leader of Hezbollah. "There cannot be anything more beautiful," he proclaimed.

Al Gore could see nothing but positive qualities in his buyer, putting out a shameless statement that claimed, "Al-Jazeera, like Current, believes that facts and truth lead to a better understanding of the world around us."

Gore rebuffed an offer from conservative radio/TV personality Glenn Beck to buy Current TV. Beck was told, "The legacy of who the network goes to is important to us, and we are sensitive to networks not aligned with our point of view."

Beck is not aligned with the Gore viewpoint, and yet Al-Jazeera is? Al Gore, too, would celebrate a child-murdering terrorist with a birthday cake? Why isn't this alignment controversial or newsworthy?

Then the story gets worse. While Beck told his listeners he was rejected within minutes, Gore became a lobbyist for Al-Jazeera. New York Times media reporter Brian Stelter revealed that to preserve the deal and his big payout, Gore went to some of cable distributors looking for an excuse to drop the low-rated channel, "and reminded them that their contracts with Current TV called it a news channel. Were the distributors going to say that an American version of Al Jazeera didn't qualify, possibly invoking ugly stereotypes of the Middle Eastern news giant?"

But the networks won't breathe a word about Beck, and never allowed a conservative or a critic of radical Islam to offer any criticism of either Al Gore the super-rich sellout, or his terror-enabling buyer. None dares express horror that the man who was almost president on 9/11 was allying himself with al-Qaida's video jukebox.