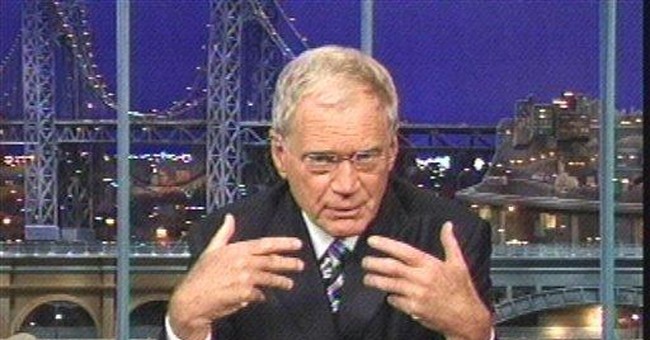 In the wake of the arrest of director/rapist Roman Polanski comes the sex-with-subordinates scandal of David Letterman. The timing was a blessing for Letterman, since his aggressive excuse-makers now could quickly assert that the female employees he exploited were all adults and all gave their consent.

Letterman's habit of engaging in sex with women who are his employees only emerged because of an ugly extortion threat from a longtime CBS News producer who lived with one of Letterman's conquests. That's doubly embarrassing for CBS, which has character problems coming and going. Letterman added to the embarrassment by revealing the extortion and his behavior in a jokey manner on his show. CBS had enough distaste for the explanation to have it pulled off YouTube and try to keep people from seeing it. (Wouldn't it be nice if CBS had similar standards for its other programming, like, oh, most everything on MTV?)

In a second attempt at an apology, Letterman was more sincere. But in the morality challenged entertainment community, Letterman knew he could surround himself with friends who found nothing to condemn or even question.

"He's the greatest host in the world," said fellow comedian Chris Rock in an adoring haze. "I would never make a disparaging comment about David Letterman." Steve Martin offered this friendly take to Letterman: "It proves that you're a human being, and we weren't really that sure before."

Even celebrities few recognize (or remember) are stepping up to defend Letterman. "I don't see anything wrong with it," said Sandra Denton, better known as half of the rap duo Salt-N-Pepa. "I might have been one of the girls. He's a man ... and he's kind of cute!"

Susie Essman, who stars on HBO's "Curb Your Enthusiasm," said people should treat the matter like adults. "I wasn't like, 'Oh, not Dave. It couldn't be! ... He had a relationship with somebody. What's the big deal? He wasn't married. He wasn't cheating on his wife."

This is where the situational ethics in the egocentric world of entertainment begins to look ridiculous. Letterman didn't marry longtime companion Regina Lasko until March, but they're been together since 1986, and they had a son together five years ago. So was he free to cheat on her because they weren't married? Here we go again: Conservatives are held to moral standards because they have them; liberals aren't because they don't.

Then there's another line of defense raised by others, among them actress Jamie Lee Curtis: "David Letterman makes this revelation about his personal life because he was being extorted. I understand he was staying ahead of the wave and I commend him for it, but really, is this any of our business? Why should this matter?"

There's another way of putting it: Is anyone surprised? Surprised that a Hollywood superstar has affairs? Stop the presses! On that score, I'm almost willing to agree with Ms. Curtis. Almost.

But then Ben Mankiewicz of Turner Classic Movies goes on CNN and in defending Letterman, actually underscores why Letterman's behavior was so distasteful. "It's not like Bill Clinton having sex with an intern," Mankiewicz said. "It is the story of a guy who was single for 25 years, a sort of pronounced bachelor, having affairs with women who worked on his staff. That may be a problem for CBS. I really don't think it's a problem for anyone else in the country." He insisted: "I just don't see the scandal, and I certainly don't see the hypocrisy."

That leaves a bad taste in the mouth. It's clearly hypocrisy.

Washington Post TV critic Tom Shales also saw zero hypocrisy, even as Letterman mocked every sex scandal subject from Clinton to Gov. Mark Sanford: "Letterman can continue to lampoon sleazy political figures with no real fear of hypocrisy, however, because a TV comic is not an elected official responsible for the well-being of the nation or its citizenry."

But is Letterman only a "clown," as Shales put it, or does mocking adultery imply a moral judgment? AP television writer Frazier Moore forwarded a list of scandal figures Letterman has mocked, and then trumped it. With Gov. Eliot Spitzer, Letterman demanded the governor resign: "I mean, can you imagine," said Letterman, "if this happened to me how fast they'd have my (backside) out of here?"

Shales insisted the scandal shouldn't ruin Letterman's reputation as "the wisecracking, self-deprecating, overgrown adolescent who has one of the keenest, cleverest and funniest comic minds of all time."

Shales then went to an online chat at the Post website and defended Roman Polanski's rape: "In Hollywood I am not sure a 13-year-old is really a 13-year-old."