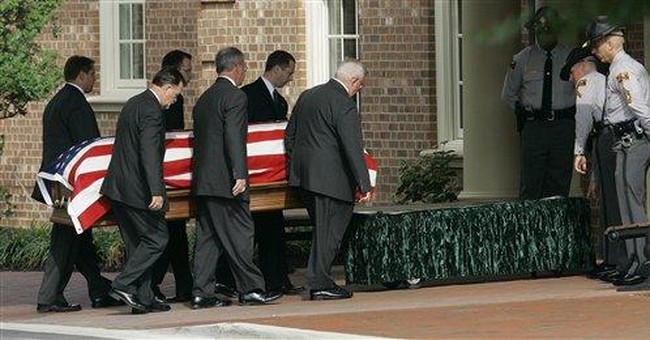 Conservatives across America mourned at the news of the death of Sen. Jesse Helms, a man credited with impeccable conservative credentials in the U.S. Senate, a conscience of a movement devoted to the defeat of communism abroad and the defense of liberty at home. He was the staunchest of social conservatives as well, unflinching in his opposition to the abortion lobby and the gay agenda.

To liberals he was "Senator No," which meant only that he would strongly oppose everything they wanted to impose on America. Their badly disguised loathing of Helms, well-expressed over the decades, only endeared him to conservatives all the more.

Jesse Helms relished that opposition. In 1990, the media declared him politically dead, his re-election an utter impossibility. On election night, a thousand cheering supporters were made to wait before their man finally emerged to declare victory, 20 minutes late. He opened his remarks by apologizing for his tardiness. "Ah was up in mah room," he explained, "ah had to watch the grievin' face of Dan Rathuh when he had to say we'd won agin." The crowd went wild.

When Helms announced his retirement from the Senate in 2001, the media elite made their own distaste very clear. "He was so wonderfully odious," declared top Newsweek editor Evan Thomas. "He was very comforting to the East Coast media establishment to know that there was an evil guy out there that you could really fear." Thomas doesn't feel the need ever to express hatred of the Soviets. He didn't fear or hate the Maoists. He didn't fear or hate a Holocaust-denying Islamofascist like Ahmadinejad. He feared and hated an American patriot.

Their loathing was so acute they even called him a dictator and a terrorist. When Helms held up President Clinton's nomination of soft-on-drugs Republican William Weld as ambassador to Mexico in 1997, ABC's Sam Donaldson said, "beneath that courtliness beats the heart of a dictator." George Stephanopoulos added: "Or a terrorist." NBC also decried his "dictatorial tactics" in delaying a confirmation hearing for Weld -- something Democrats have done routinely throughout the Bush years without any of these media slurs.

Civility demands that when a major political figure dies, journalists (and others, too) should summon their respects, acknowledge the importance of this national figure and perhaps even concede that the intentions of his public service were good. Not so with Jesse Helms. The Washington Post stressed Helms "rode his divisiveness to victory." The New York Times obituary threw punches, describing him as the senator "whose courtly manner and mossy drawl barely masked a hard-edged conservatism that opposed civil rights, gay rights, foreign aid and modern art."

The networks were no better. NBC's Lester Holt blatantly copied the Times: "He staked out firm positions against everything from communism and foreign aid to civil rights and modern art." NBC reporter Martin Savidge called Helms an "ultra-rightist." But when ultra-leftist Sen. Howard Metzenbaum died in March, NBC found no time for a label (or even a political party). They sweetly praised "the classic American success story" of a man who "always fought for the little guy, taking on the oil and insurance industries" as he "stuck to his populist principles."

Perhaps unsurprisingly, liberals on the Internet made these old-media critiques look sedate. They didn't see any need to observe any kind of civility, letting their rage and ill will erupt like a spewing volcano. The blog Wonkette featured the headline "See You In Hell: Jesse Helms Finally Dead." They cheered: "Jesse Helms was apparently still alive, and now he's dead, hooray! He was a sour troll and a bigot, and it's a testament to every rotten thing about this country that for a quarter century, he was one of the most powerful people in American politics."

Wonkette linked to Ken Layne on America Online's Political Machine blog, whose headline was "Jesse Helms, American Garbage." Layne said Helms died "25 years too late," and he was "a mean little troll whose heart was so wrecked by wickedness that doctors had to patch it up with coronary valves from a pig."

The gossip site Gawker said being nice to Helms would be unthinkable, akin to saying "Hitler was kind to animals." Leftist blogger Phil Nelson summed it up for mean-spirited liberals with his headline: "Jesse Helms Is Finally Dead. Let's Have a Cookout."

You wouldn't have this kind of "luck" searching around the Web looking for high-profile conservative bloggers cheering Howard Metzenbaum's death and describing him as evil and destined for Hell. Go ahead, liberals: look.

At a moment like this, when friends and family and allies of Sen. Helms mourn, it's quite clear that liberals should not suggest in public that they are somehow losing to conservatives in a contest to demonstrate who has more capacity to display callous, middle-finger meanness and breathtaking insensitivity.