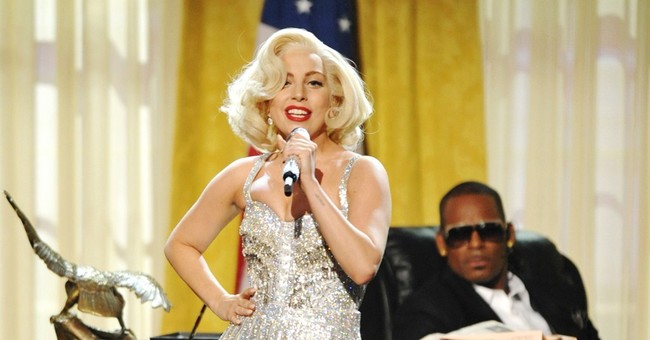 "In September at the opening Mass I officially announced that this was going to be the Year of Our Lady at SMI," the letter began.

How nice. Except that's not what he wrote. There was someone else he had in mind to honor besides the Virgin Mary.

"In September at the opening Mass I officially announced that this was going to be the Year of Lady Gaga at SMI."

That's what he proclaimed. Apparently during mass, too. Why Lady Gaga? Was every other living or dead female or male on planet Earth or anywhere else unavailable? The answer, he explains, is "complex," which is a euphemism for scandalous.

First, he writes, "many people may not realize that Lady Gaga is the product of Catholic education." (To which the response would be: so was Hitler.) Her real name, he tells us, is Stefani Joanne Angelina Germanotta, as if she were some obscure Italian saint. She is a graduate of the Convent of the Sacred Heart, where -- and here we're getting to the point -- "she was someone who followed her own path ... It takes a great deal of courage especially for young people to blaze their own trails in life!"

Was it her attire during the nationally broadcast MTV Video Music Awards last year, watched by millions of children -- a thong?

Was it her video earlier this year in which she simulates all manner of sexual activities while bizarrely "resurrecting" from their tombs Michael Jackson, Mahatma Gandhi and -- maybe this was it? -- Jesus Christ?

Was it her song "Judas" in which she proclaims: "I'm still in love with Judas, baby. Jesus is my virtue," but "Judas is the demon that I cling to"?

Was it how she constantly promotes gay themes in her music and bashes the military for its treatment of gays? Or maybe she's a trailblazer of another sort. Speaking at a gay-left dinner in 2011, President Barack Obama began by joking, "I took a trip out to California last week, where I held some productive bilateral talks with your leader, Lady Gaga."

Medwid's second reason for having a Catholic grade school honor Lady Gaga is also vague. It is "to highlight her immense creativity."

Was Medwid impressed when Lady Gaga said of Pope Benedict XVI, "What the Pope thinks of being gay does not matter to the world"?

Maybe it was her "Marry the Night" music video in which she depicts herself having an abortion.

Maybe it was the song she deliberately released on Christmas Day, "Stuck on F---in You" (and no, nothing's edited in the song).

Or is it just her mind we should celebrate, as when she stated on an MTV program in 2010: "For me this evening, if we don't stand up for what we believe in, and if we don't fight for our rights pretty soon, we're going to have as much rights as the meat on our own bones. And, I'm not a piece of meat."

That statement by Lady Gaga makes just about as much sense as a supposedly Catholic grade school, bearing the highest of responsibilities - providing a moral education to children -- honoring her.