Brad Slager
|
Posted: Nov 24, 2020 12:00 PM
Share   Tweet
The opinions expressed by columnists are their own and do not necessarily represent the views of Townhall.com. 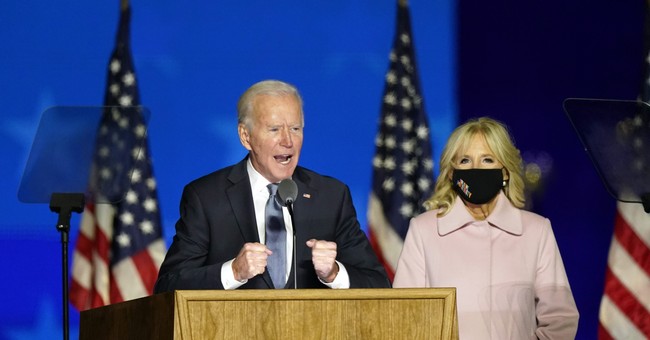 It appears the Biden team is playing on sympathies and demonizing the administration for fun and profit. Not only has the press been in a dose of hysterical contempt regarding the delay in the confirmation of the election, the Joe Biden camp is playing off of that outrage to gather in more funds. Citing the reluctance of the General Services Administration to officially acknowledge him as President-elect, Biden is fundraising to aid his entry into the office. The hitch is he has been, long prior to his announced victory in the press.

Donald Trump has just authorized that the GSA can release the money and services to the Biden campaign for his transition team. This does not mean the President is abandoning his legal efforts regarding the elections, but is seeing fit that not only is the will of the country addressed but that GSA Director Emily Murphy is relieved of some of the stress and harassment she has endured.

The Biden camp, while very vocal about the stalled efforts, has been notably silent regarding the threats and harassment Murphy has received from the left. But the fundraising by Joe has been in full swing.

Millions have been raised so far, and the push by the Biden transition team continues, leaning heavily on the sympathies of supporters. “There’s definitely been an uptick in their urgency, and their main argument, their main pitch to donors is to make up for the [GSA] shortfall,” said one Democratic bundler. While much has been made in the press about the Biden camp being stymied from attending briefings, gathering needed intelligence, and having access to certain government officials the Biden camp is also claiming to be losing out on physical needs.

To date Biden has drawn in over $8 million, declaring they are in need as a result of the GSA withholding $10 million they are entitled to as an incoming administration. “The law says that the General Services Administration has a person who recognizes who the winner is,’’ states Biden. ‘’They have access to all the data and information the government possesses to be prepared. It doesn’t require there to be an absolute winner. It says the apparent winner.”

Except the GSA has made many of the needed provisions. A spokesman for the GSA has cited the laws that cover the office making the declaration in an accurate fashion, but they also confirmed that the Biden team has been granted many services already. The GSA has in fact been providing the Biden team the physical needs of office space, enough to sustain 500 workers, as well as being furnished and with IT support.

So with the basic physical setup needs in place then the hitch to the Biden team’s transition is primarily one of contact with needed officials and offices, not necessarily infrastructure. With the costly office requirements provided for, this means the Biden camp is fundraising off of the demonization of President Trump, and his GSA office, being mean to Joe Biden. Here is the revealing aspect -- The Biden camp began fundraising for this projected GSA holding of funds back in June.

This means all the caterwauling in the press and the dramatic readings from Joe Biden are all a floor show. The GSA sat on the funding as a result of numerous states that had election totals still in the balance. Nothing has been certified as a result, something that is not due to maneuvers made by Trump but by the realities of a completely buggered election. Yet the Biden camp has been referencing the dastardly actions of the Trump Administration in order to draw in additional money, even well before the party conventions.

This is who you selected, Democrats. A man who has been soaking donors over a perceived financial slight that was referenced months ahead of the actual election, and has not led to a financial hardship. As long as you dupes keep wiring the cash these practices will be in play for the next four years.

Share this on Facebook
Tweet
Virginia Woman Charged After Threatening to Show Up to Child's School with Guns in Protest of Mask Mandate
Landon Mion
While Thousands Were Marching for Life, Here's What Democrats Have In Mind
Rebecca Downs
Kyrsten Sinema Censured By Arizona Democratic Party Over Opposition to Nixing Filibuster
Landon Mion
‘What Is a Woman?’: Matt Walsh Appears on ‘Dr. Phil,’ Presses ‘Non-Binary’ Individuals on Gender
Landon Mion
Families of U.S. Embassy Personnel in Ukraine to Be Evacuated, Nonessential Personnel Also Asking to Leave
Rebecca Downs
Bill Maher on Biden's First Year in Office: 'America Has Lost Its Faith in Joe'
Landon Mion