Brad Slager
|
Posted: Aug 29, 2020 12:01 AM
Share   Tweet
The opinions expressed by columnists are their own and do not necessarily represent the views of Townhall.com. 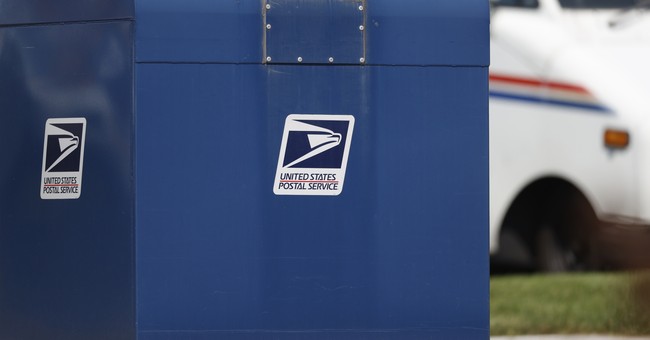 Between the two conventions this month there has been a curious dose of dissonance emerging on the left and in the press. At once there has been the effort made to declare Qanon a toxic conspiracy mill, with the intent of making anyone who can be accused of connection or being supportive poisoned as a result. At the same time these sources have been willing to push the narrative that President Trump is attempting to shut down the US Postal Service ahead of the proposed nationwide mail-in voting effort.

It is a marvel of obliviousness that those who are decrying conspiracy theories are circulating "proof’’ of the President’s alleged efforts. A brokedown mail vehicle on a tow truck was said to have been stolen, with votes inside. Mailboxes with locks on them, and those taken off the streets in a years-in-the-process refurbishment program were said to be done to block votes. Then there was the sorting machine outrage. Old and decommissioned machines that had been upgraded and replaced were said to be shut down on Trump’s order, absent anything approaching evidence.

Conspiracies are unacceptable, but these hysterical myths were circulated without a sense of irony. The end result is that the maligned Postmaster General, out of a sense of optics, has suspended any further sorting machine replacement. This means that should the surge in mail-in postal traffic take place it is more likely to be handled on outmoded machinery. Talk about a self-fulfilling prophecy.

Clearly this is all being done to push forward the mail-in vote gambit. There are many who suggest that this is an effort to manipulate results, a valid concern given there is a history of tampering with the current mail-based vote method, absentee voting. It seems that just as possible is the intent of completely making a fiasco of the voting process, and thus using that upheaval as a talking point. Should Trump win a reelection, by example, the muddled methodology will be pointed out as corrupting the result, leading them to accuse an invalid result.

What is overlooked in this push for nationwide mail-in voting is that we already have seen results of this process on a small scale, and they have been disastrous. In New York two districts were flooded over with mail-in votes, and it took SIX WEEKS for a winner to be declared as a result. Ill-prepared counting methods were just the start. There had been insufficient amounts of ballots made and the district received more with only two days remaining before the election.

The Pennsylvania primary was no less disorganized. As the state allowed for broader mail-in acceptance they encountered problems throughout the processes of applications, distributing, and receiving and counting properly. Mail delivery was also a problem. A large number of those requesting mail-in ballots received them close to the election date, with the estimate that 25% never managed to be recorded, a loss of over 90,000 votes.

Another issue with the mail-in process is the high attrition rate. Voting rules by mail require a voter’s signature, and they need to be postmarked by the valid election date. This means large swaths of ballots are tossed out as invalid due to a lack of signature, postmarked after the deadline, or - in a curious sign of fakery - received with no postmark at all. It is here where we start to get into the fraudulent aspects of this process.

In one New York district, where a victory was by a 3,700 vote margin, this led to 13,000 ballots being disqualified. In that Pennsylvania primary 37,000 ballots were disqualified, and in California their voting by mail led to 100,000 discounted ballots. When these figures are seen the usual call by politicians is to run to the courts and get judges to permit those illegal ballots to be verified and counted.

In Pennsylvania the Governor, Tom Wolf has pushed for measures to have deadlines extended, and other provisions involving the permitted actions for the expanded mail-in voting. Some states have declared a desire to automatically send out ballots to all voters, regardless of requests being made for them. The increased likelihood of double-voting is another concern.

With absentee voting you have to reach out to your polling precinct in order to receive a ballot by mail, and the system is supposed to make an adjustment reflecting this to be your ballot. This way if you were to show up at the polls on election day the system would trigger and reflect you have already been granted the privilege to vote. If ballots are sent out to all voters by default that measure is gone.

Then there have been stories reported across the country of people being sent multiple ballots to the same address. Some precincts sent out duplicates of mail-in and absentee ballots, others have mailed out ballots to both current and previous residents. All of these are issues the proponents of mail-in voting want to pretend are not serious issues. And those are mostly administrative problems on a local level. Broaden those to a national election challenge and the problems sound unmeasurable.

Now factor in the issue of the post office, which prior to this call for national mail-in voting managed to lose 28 million ballots over the course of the last four elections. Yea, if there is one thing that sounds like a bad idea it is taking an already problematic process and adding an additional monolithic government agency into the mix.