Brad Slager
|
Posted: Jul 22, 2020 2:09 PM
Share   Tweet
The opinions expressed by columnists are their own and do not necessarily represent the views of Townhall.com. 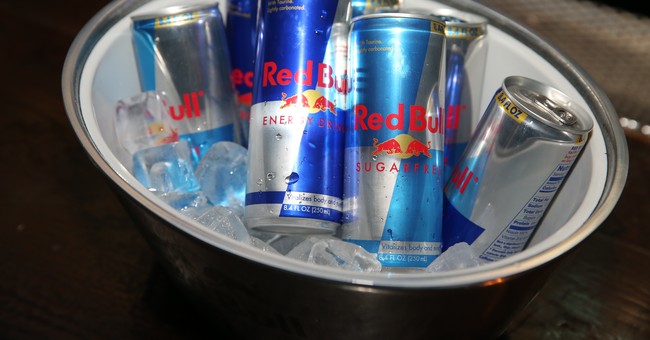 This may sound unrealistic, but a number of sources have confirmed this to be the case -- a company has not caved to social pressures of the newest activist movement. Word has come out that the energy drink maker Red Bull was facing internal efforts to alter the corporate structure and remodel the company to be more compliant to the demands of racial diversity. Instead of reacting as a guilty party and issuing unneeded apologies the company went the opposite direction -- it fired those causing the strife.

It has been with distressing regularity that we have watched companies and corporations bend the knee in deference to the outrage class over the past few months. Numerous accusations and calls for disbanding alleged institutional racism have been met with meek reactions of assumed guilt by many businesses. Last month it was risible when countless companies rose up for Blackout Tuesday and delivered open letters declaring their newfound stance against racism.

This social signaling exposed the minefield a business wades into when engaging in social activism; declaring to be opposing racism and pledging to take new steps to ensure equality sounds noble, but it also carries an unintentional admission. It frequently became a case where the company ends up sounding as if it admits it had been racist and discriminatory.

There are some encouraging signs this practice might be changing. We recently saw the ridiculous outrage towards Goya Foods when that company’s CEO made some positive remarks about President Donald Trump. The difference was when the social media snit welled up the head of the company, Bob Unanue, who refused to buckle. When asked to respond to the announced boycott he was not the least bit apologetic and reiterated his words of support for the initiatives from the Trump administration.

In a different scenario, but one displaying a similar stance, Red Bull North America was faced with an activist push within its ranks but instead of reacting with declarations of proper comportment the company elected to rid itself of the troublemakers. An internal company-issued letter from some employees was critical the company had not been more vocal and forward in support of the Black Lives Matter movement. The letter was leaked to the public, and it seems the parent company believes that two top executives from Red Bull North America were responsible.

The CEO Stefam Kozak and the president of the division Amy Taylor were let go, as well as another executive responsible for some racially offensive graphics, which had been presented at a corporate meeting earlier this year and had also been leaked. Business Insider said that Taylor had been particularly vocal in her calling for more racial inclusiveness. The company took what is nowadays a unique position on the matter -- it declared they are already a racially inclusive company.

In response to the leaked letter, and to the internal calls for more diversity, the company issued a memo, made public, that explained the corporate positions. It is a refreshing change to see a global corporation electing to declare it has already addressed the issue of racism and inclusiveness.

"We reject racism in every form, we always have, and we always will. Anyone who knows anything about our company knows this. Red Bull has always put people and their dreams and accomplishments at its core and values the contribution of each and every person — no matter who they are. We want everyone who feels this way to be welcome in Red Bull."

This is how it is done. No apology for misdeeds not committed, no gesturing about how the company will be making symbolic maneuvers to appease the activist voices, and no tacit admission that the company needs to address flaws in its structure. In an effort to deliver even more of a message that it will not be forced into appeasement with the outside activism the company cancelled a number of cultural events and it dissolved the cultural teams in numerous countries.

One source in the company told Business Insider these teams were regarded as the primary sources of the push for racial justice. Red Bull seems intent on delivering a completely different message than was expected. When arriving with the calls for changes and possible firings the activism crowd was actually greeted with professional scalps, except instead of the unexpected variety. Instead of those accused of being guilty parties it became a case where the activists themselves found they were canceled.

It is encouraging to see that not all companies are operating with a default stance of being guilty.