Bob Blackman
|
Posted: Sep 16, 2020 2:09 PM
Share   Tweet
The opinions expressed by columnists are their own and do not necessarily represent the views of Townhall.com. 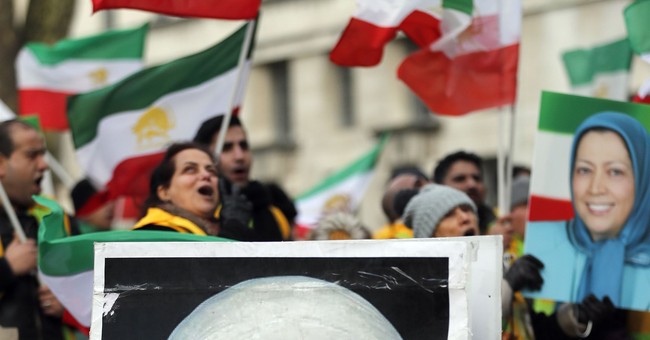 The main Iranian Resistance recently organized a series of international conferences to discuss issues of consequence to the Iranian people and to Western policy toward the Iranian regime. The main focus has been on the persistent domestic uprisings in Iran since 2017 and the approaching prospects of the clerical regime's downfall.

The National Council of Resistance of Iran (NCRI), which hosted the online gatherings, has been very clear about its position that the country’s future must be determined by its own citizens. But it has been similarly unequivocal about the need for a change in how the Western world approaches the ayatollahs. Thus far, the West's predominant policy has been appeasement, with some policymakers explicitly voicing their hope that the clerical regime will one day give into moderate impulses and change its behavior from within.

This is a hopelessly naïve expectation. Conciliatory policies have always led to an emboldened Iranian regime. This can be seen in the effects of the Iran nuclear deal, which the regime began violating even before the U.S. withdrew in 2018. The flawed deal included the expiration of a vital arms embargo in 2020, giving the regime opportunities to openly purchase advanced weapons from countries like Russia and China.

Some of those weapons will then make their way into the hands of Iran-backed terrorists, especially considering that the regime’s track record as the world’s leading state sponsor of terrorism has resulted in precious few consequences being imposed by the international community.

Much of the world remains ignorant of the fact that Iran's rulers attempted to carry out multiple attacks on European and American soil in 2018 alone. In June of that year, two operatives under the command of a high-ranking Iranian diplomat attempted to carry explosives to the annual gathering of the NCRI near Paris. Had the plot succeeded, the list of victims might have included any of the dozens of Western lawmakers and policy experts who had been present to show their support for the NCRI.

The diplomat who masterminded that plot, Assadollah Assadi, is currently awaiting trial in Belgium and the outcome of his case may end up saying a great deal about the status of Iran’s impunity. The case should serve as an eye-opener for Western leaders who have been prone to downplaying the threats emanating from the regime.

To its credit, the White House didn’t need such an eye-opener. By the time of the Paris terror plot, the Trump administration had already put into place a strategy of “maximum pressure” on the Iranian regime. Since then, it has been trying at every turn to urge a more assertive shift in its allies’ policies, as well. The administration has come up against a lot of roadblocks in this effort, not the least of which was the UN Security Council vote on the arms embargo, from which the UK and France shamefully abstained rather than stand up to Russian and Chinese support for an Iranian arms trade.

New U.S. sanctions were just recently imposed on more than a dozen companies and individuals accused of helping the regime to evade restrictions on its sale of petroleum products.

But America's continued isolation on this matter is not a foregone conclusion. The NCRI’s conferences see numerous examples of British and European lawmakers urging their governments to break away from the longstanding policy of appeasement, and to adopt policies akin to “maximum pressure,” which will surely do a better job of preventing Iranian arms sales, discouraging the ongoing support of international terrorism, and avoiding violent crackdowns on the Iranian population.

During the 2017 and 2019 uprisings, the Iranian people chanted “death to the dictator” and called for democratic regime change. On the orders of the regime's supreme leader Ali Khamenei, the Islamic Revolutionary Guard Corps (IRGC) opened fire on crowds of protesters in November 2019 and killed at least 1,500 people in only a few days.

Like the Paris terror plot and a laundry list of other malign actions, this incident was duly condemned by Western governments but was not even given a fraction of the kind of attention it deserves. The November massacre was a chilling reminder of how little progress the clerical regime has made toward illusory "reforms."

In 1988, the clerical regime initiated what may be the worst crime against humanity in the latter half of the 20th century, killing approximately 30,000 political prisoners in a series of mass executions. The vast majority of the victims were supporters of the primary organized opposition Mujahedin-e Khalq (MEK), which has been credited with leading the two recent uprisings.

The regime cannot be allowed to continue its crimes against humanity with virtually absolute impunity.

The UN General Assembly will be held this month, providing ample opportunity for discussion of the regime's genocide and crimes against humanity. This year, the sponsors of the relevant resolution should see fit to include more explicit language, including calls for a long-overdue investigation into the 1988 massacre. By doing so, they could start the ball rolling toward greater accountability overall, and finally to the repudiation of ingrained Western impulses toward appeasement of a brutal dictatorship.