A Pattern of Perjury 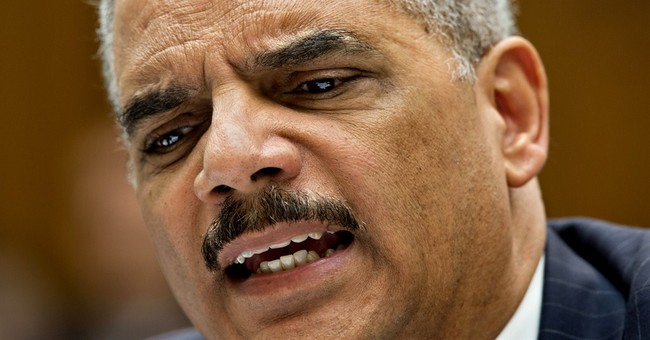 Even the most ardent liberal defenders of Eric Holder acknowledge that the embattled Attorney General "is in a mess of his own making," as Dana Milbank of the Washington Postput it.

Under fire for his Justice Department going after AP reporters' personal records, Holder testified in May 2013 to Congress: "With regard to potential prosecution of the press for the disclosure of material, that is not something that I have ever been involved in, heard of, or would think would be a wise policy."

But, Holder was caught in a lie when the Washington Post exposed an affidavit bearing Holder's signature naming Fox News reporter James Rosen as a "co-conspirator" in a 2009 foreign espionage case.

Recognizing that Holder's actions belie his claim that targeting reporters was "not something that I have ever been involved in," the two top ranking members of the House Judiciary Committee have written a letter to Holder looking for answers.  Politely pointing out that the media reports and DOJ documents uncovered in the case "appear to be at odds with your sworn testimony before the (Judiciary) Committee," Chairman Bob Goodlatte and James Sensenbrenner, Chairman of the Sub-Committee on Investigations, then list a page and half of questions for which they want answers by June 5.

As the worm turns and a perjury case builds against the Attorney General, it is worth noting that this is hardly the first time Holder has crossed the line between truth and fiction with Congress.  In fact, it started almost immediately after he took office.

On Election Day 2008, members of the New Black Panther Party in paramilitary garb wielded night sticks and intimidated voters at a Philadelphia polling location with threatening racial slurs.  The DOJ's attorneys in the Voting Right Division obtained a default judgment against the thugs in what has been called "perhaps the most clear cut case of voter suppression and intimidation ever."  Just prior to sentencing, however, the DOJ dropped the prosecution with barely a slap on the wrist for the Panthers.

In March 2011, Holder was questioned about his involvement in the decision by a Congressional Committee and said that the "decisions made in the New Black Panther Party case were made by career attorneys in the department."

That was not true.  As part of an effort to get at the truth, Judicial Watch filed a Freedom of Information lawsuit in U.S. District Court.  Among the findings, the court ruled that, "The documents reveal that political appointees within DOJ were conferring about the status and resolution of the New Black Panther Party case in the days preceding the DOJ’s dismissal of claims in that case."

J. Christian Adams, a career attorney in the Voting Rights Section of DOJ that prosecuted the New Black Panther case testified before the U.S. Civil Rights Commission that it was in fact Associate Attorney General Thomas Perrelli, an Obama political appointee and top aid to Holder, who overruled the unanimous recommendation for full prosecution by Adams and his colleagues.

Another lie involved the Fast and Furious scandal wherein the Administration "walked" hundreds of highly lethal weapons into the hands of the ultra-violent Mexican drug cartel.  Some of those weapons were eventually linked to the assassination of U.S. Border Patrol Agent Brian Terry.

Rep.Darrell Issa grilled Holder in a House Oversight Committee hearing in May of 2011; "When did you first know about the program officially I believe called Fast and Furious? To the best of your knowledge, what date?"  Holder replied, "I'm not sure of the exact date, but I probably heard about Fast and Furious for the first time over the last few weeks."

That was not true.  As Sharyl Attkisson of CBS News and many others reported, a July 2010 memo – ten months before the Congressional hearing – to Holder from the head of the National Drug Intelligence Center briefed the AG that through F&F "1500 firearms were then supplied to the Mexican drug trafficking cartels."   Attkisson documented at least six additional briefings between July and November 1, 2010 to Holder about F&F including from Holder's Assistant Attorney General Lanny Breuer.

Holder has defended himself by suggesting that he didn't understand Issa's question, and that he meant to say a "couple months" instead of "weeks."

New Black Panthers, Fast and Furious, and Rosen-Fox News – three strikes should be enough to call Eric Holder out.  Regardless of Obama's feigned "absolute confidence" in Holder, look for a resignation by July 4.