Bob Barr
|
Posted: Jul 30, 2019 1:30 PM
Share   Tweet
The opinions expressed by columnists are their own and do not necessarily represent the views of Townhall.com. 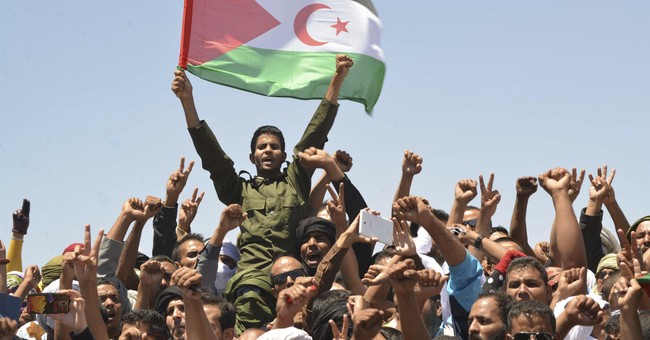 President Donald Trump’s critics, including those in the media, delight in picturing him as a person unconcerned about human rights, and as a president totally unconcerned with the plight of those seeking freedom around the world. As often is the case in politics, the reality is quite different. The ongoing refugee problem in North Africa presents just such an example.

Hundreds of thousands of displaced refugees in North Africa’s Western Sahara region may have more reason for hope today than ever before, thanks to the Trump Administration’s concern and involvement.

In the 1970s, the people of Western Sahara, then known as the Spanish Sahara, thought for a brief moment that they would be free when Spain renounced her colonial claims, but it was not to be. The territory was soon occupied by the Kingdom of Morocco which continues to claim the area as its own, despite rulings by the International Court of Justice and numerous United Nations Resolutions recognizing the right of the region’s inhabitants, the Sahrawi, to self-determination.

In 1991, after years of fighting, the UN worked out a ceasefire in which the parties agreed that the fate of the territory would be determined by referendum, giving the Sahrawi people the right to determine their own future. By that time hundreds of thousands had fled the conflict and were living in UN-administered refugee camps in Algeria. They were expecting to return home to Western Sahara after the referendum, but that vote has yet to take place and they continue to live in those same camps nearly 30 years later.

In the meantime, the people of Western Sahara have prevailed at the International Court of Justice and other legal tribunals which have consistently found that Morocco has no ethnic, religious, or historical claim to the territory it has seized from them. None of these decisions nor the virtually unanimous demand that she relinquish what has come to be known as “Africa’s Last Colony” have moved Morocco from ignoring the law and world opinion.

President Trump’s National Security Advisor, John Bolton, asked in a major speech on U.S. African policy earlier this month why the United Nations has taken 27 years to organize a referendum among a mere 70,000 people. It’s a good question.

There have been numerous attempts to reach agreement on the date and conditions for the promised referendum, but thus far none have worked out. The closest came when, after George H.W. Bush left the White House on January 1993, James Baker, his Secretary of State, accepted appointment as the UN Special Envoy for Western Sahara. Baker believed he had an agreement, but Morocco backed out at the last minute, the negotiations ended, and Baker went home to Texas.

Earlier this year it appeared that there might be some positive movement. After months of meeting with the parties separately, former German President Horst Köhler who is the current Special Envoy for Western Sahara, convinced the parties to meet together at a “roundtable” last December and again this past March. The primary parties are the Kingdom of Morocco and the Polisario Front representing the Sahrawi people, but other nations in the region affected by the instability and uncertainty stemming from the impasse were included in the meeting as well.

In a sense, the fact that these meetings took place at all represented significant progress because there has been no move toward solving the lingering crisis of Western Sahara, but later Mr. Köhler abruptly resigned and the impasse continues. This is bad news for the region, for the countries involved and, most of all for the people of the Western Sahara.

The Sahrawi men, women, and children forced to flee their homeland and languish in refugee camps within neighboring Algeria continue to hope the impasse will ultimately be resolved if the United Nations simply delivers on the promises made so many years ago. That may be wishful thinking given the track record of the UN, but they are also somewhat more realistically counting on the United States and the Trump Administration to put real pressure on the UN and Morocco to accept the need to allow the referendum to proceed.

At this juncture, the people of the region are wiser to rely on the United States, Mr. Bolton and President Donald Trump, rather than on a United Nations promise that, without pressure from the United States and the world community, will likely never be fulfilled.