Obama’s American Vision -- 'A Shining Stall in the Restroom'

Bob Barr
|
Posted: May 17, 2016 12:01 AM
Share   Tweet
The opinions expressed by columnists are their own and do not necessarily represent the views of Townhall.com. 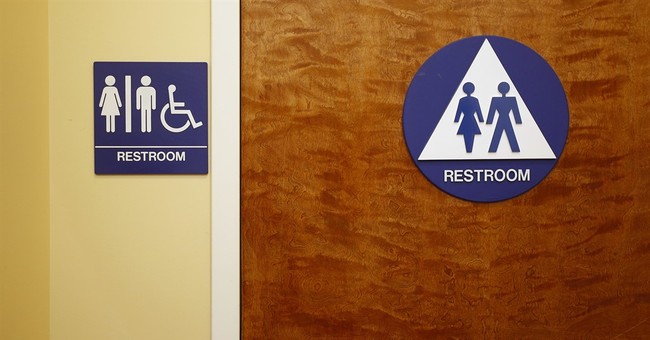 A long, long time ago, American presidents set lofty goals for our nation; a country they considered without question to be the most exceptional in the world. Presidents envisioned a young and daring nation expanding westward to uncharted territory; others led efforts to fight real wars and vanquish some of history’s most feared tyrants; and some sent Americans outside the reaches of the sky and onto the surface of the moon.

These milestones in our national history, as well as the once-manifest sense of American exceptionalism, inspired President Ronald Reagan to urge mankind to strive for that “shining city on a hill,” which people around the world and through the years saw as a model for human freedom and achievement. America’s sights were high.

How low our national gaze has fallen. Today, we have a President whose vision for 21st Century America extends no further than a “shining stall in the restroom.”

Rather than build and inspire a nation in the ways that presidents such as John F. Kennedy and Reagan did -- reminding citizens of how much we have accomplished, and how much we still can achieve -- President Barack Obama has spent his time in office shaming Americans about their past sins and present shortcomings. Now, in the twilight of his eight-year term in office, he has turned his gaze inward with a vengeance.

No longer is Uncle Sam focused on challenges that will inspire new breakthroughs in science, agriculture or educational achievement. He now is transfixed on . . . transgendered bathrooms.

The issue of transgender bathrooms is already embarrassingly questionable as a responsibility for even state and local governments; essentially a solution in search of a problem. And the federal government’s entry into the debate is perhaps the silliest cause célèbre Uncle Sam has ever taken on.

How many “transgendered” people are there impacted by laws such as North Carolina’s HB2; or, even more statistically negligible, incidents in which the bathroom choice of such individuals has required interdiction by the state? And where, in even the most expansive reading of the U.S. Constitution, might one uncover authority for the federal Departments of Justice or Education to demand of a local elementary school, a private business or a county government, that it open restroom stalls to whoever “senses” their gender dictates where they should relieve themselves?

Yet, we now have a President, an Attorney General, and an army of bureaucrats, who have decided they have nothing better to do than set a goal of mandating who can use a particular restroom on any particular day anywhere in America.

America’s Left should be (but is not) outraged that “social justice” buffoons, of which Obama seems to be obsessively focused on pleasing, have again hijacked the Democratic agenda; this time to do nothing more profound than change bathroom signs. However one might read what some liberals are saying about this move by the Obama Administration, you would be forced to conclude that the most important factor in determining whether a “transgendered” student succeeds in life is being able to relieve himself or herself in a particular restroom.

The inordinate attention paid to this particular issue, illustrates perfectly why we are failing to accomplish anything of significance at home or abroad. Our goals as a nation have fallen so low and become so shortsighted, we have settled for leaders with literally no vision beyond the lowest level of human action.

The absurdity of the position the Administration is taking by wading into the “transgendered bathroom” debate has caused it to tie itself in rhetorical knots. For example, as reported in the May 13th Charlotte Observer, the Justice Department “contends that sexual orientation is not a personal decision, but is based on an array of factors affecting an individual’s sense of gender.” What utter, nonsensical gobbledygook. Moreover, the inherent contradiction in this statement – claiming at once that sexual orientation is not a “personal decision” but yet depends on “one’s sense of gender” – obviously is too complex even for America’s top lawyer, Attorney General Loretta Lynch, to recognize.

In essence, what Obama, Lynch, and other high-ranking but low-thinking officials directing federal policy are asserting, is that federal law and our once-esteemed Constitution, now stand for the proposition that each individual can decide -- based on nothing more than their “sense of gender” on any particular day -- whether to use the men’s or the women’s restroom, secure in the knowledge that the full weight of the government of the United States of America will back them up.