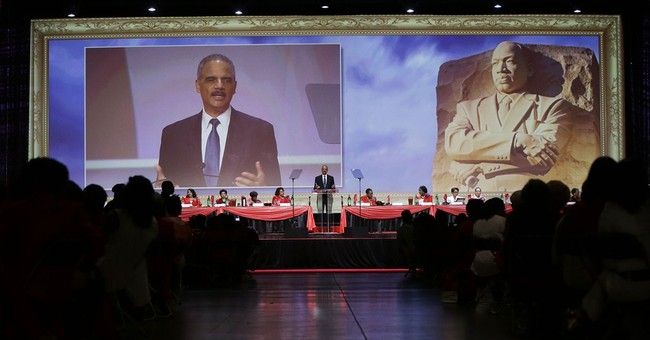 They’re at it again. The U.S. Department of Justice is getting set to meddle in a local criminal matter.

The office of the Attorney General of the United States was created in 1789, but it was not until nearly one century later, in 1870, that the federal Department of Justice was formally established. In the decades since, as the federal government has grown from one of limited and focused powers, to a leviathan reaching into virtually every aspect of our lives and businesses, the Justice Department has increased in size, scope and power accordingly.

Much of the work in which the Department of Justice is engaged is important to securing the Liberty guaranteed all of us in and by our Constitution. However, when federal authorities force themselves into judicial matters that clearly are the responsibility of local or state governments, then it has overstepped its bounds, and seriously eroded the principle of federalism under-girding our structure of governance.

We all recall the Rodney King incident and trials in Los Angeles in the 1990s. There, a local jury, after a fair trial, acquitted the police officers accused of unlawfully beating King. Dissatisfied with that result, the federal government then stepped in and brought a massive, civil rights case against the officers. They are about to do it again.

What has gotten the Department of Justice riled up this time is a case with absolutely no federal connection whatsoever – the Trayvon Martin-George Zimmerman prosecution. Once again, the feds appear upset that a local jury failed to reach the conclusion desired by Washington. Last week, following a three-week long trial almost universally considered thorough and fair, a local Florida jury acquitted Zimmerman of murder or manslaughter in the shooting death of Martin. No sooner had the jury’s verdict been announced, than Administration officials in Washington, including Attorney General Eric Holder, began talking of a possible federal civil rights prosecution of Zimmerman.

The Feds should keep their nose out of this case, which in no sense of the term involves a “federal interest,” any more than any one of the thousands of criminal acts occurring daily across the country should claim the focus of the federal government.

Still, the Obama Administration cannot resist the urge to meddle. Its interest in Zimmerman began almost as soon as the incident occurred. In March 2012, for example, the Justice Department opened an investigation of the shooting, just days after the NAACP sent a letter to Holder calling for Zimmerman’s arrest. Although Holder wisely deferred to Florida prosecutors to handle the criminal case against Zimmerman, his Department offered federal resources to support anti-Zimmerman protests, to documents recently obtained by the public interest organization, Judicial Watch. This interference is an obvious conflict of interest to any supposedly unbiased, independent investigation.

Now that the state prosecution failed to prove Zimmerman guilty, the federal department once again is targeting an acquitted man for potential federal prosecution.

Neither President Obama, nor Attorney General Holder, may like or support self-defense laws such as Florida’s “Stand Your Ground” statute. And, they may disagree strongly with the local jury’s decision to acquit Zimmerman – that is their prerogative. But, neither of these positions provide an appropriate basis on which to invoke the vast power of the federal government in effect to overturn the actions of either the Florida legislature, which passed the Stand Your Ground law, or of the properly-constituted jury, which heard the cases for and against Zimmerman and acquitted him.

If the Department of Justice moves forward with a case against Zimmerman under the circumstance here, then the precedent will have been set for the federal government to use its power to override decisions of local prosecutors, judges and juries in virtually any criminal case imaginable, anywhere in the country, at any time.