And a very MERRY CHRISTMAS to you SONY 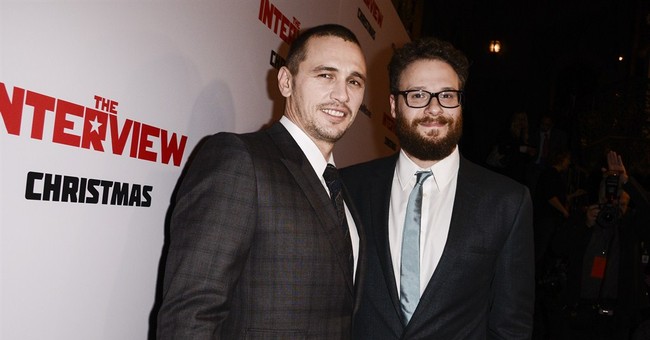 Surprise, Surprise. Who would have thought!

SONY has shown strength of character. They have decided to follow the words of one of the world’s greatest drawers of lines in the sand, Barack Obama. They have decided not to cower and will screen “The Interview” on Christmas Day after all.

The victory over intimidation is so great that perhaps some kind of an Academy Award can be created for the movie’s stars and producers. A Presidential Medal of Freedom should be in the offing for the Japanese CEO of SONY. Such political opposites as Alan Dershowitz, Rob Lowe, John McCain and John Voight should come together and hold hands for a Kumbaya moment. The bad guys have been defeated or is that a bad movie?

Of course, smiling from above in all this is P. T. Barnum who said:

“without promotion, something terrible happens…nothing!”

“The Interview” was lauded with such ringing endorsements as Variety’s Scott Foundas who said “about as funny as a communist food shortage”. Wall Street Journal’s Joe Morgenstern said “think Saturday Night Live on a really bad night”.

A bad movie. No market. No sales. No profit. Hmmmm. What to do?

I previously intimated that it made sense for a “publicity hoax to be perpetrated”. Of course now we know why. Lemonade out of lemons.

Not only would P. T. be proud since he made his customer’s suspend belief with the dog-faced boy, the bearded lady and the two headed woman but also those advertising executives on Madison Avenue who were shaking their heads today. They are all thinking, sophisticated hacking by a third rate technology country. Why didn’t I come up with that one?

Tickets for “The Interview” will be in everyone’s Christmas stocking. After all, who doesn’t want to see what all the fuss is about?

Now the President, as was suggested, will not have to do a private screening for a boring movie that deals with the assassination of a foreign leader we are trying to get along with. Nor will he have to send Cabinet Members, separately, to theaters around the country to defy the hackers, reportedly

“Mr. President you’re off the hook but could we still see the FBI evidence that proved the hackers were

Yes, a great SONY/Japanese publicity stunt that was bought hook, line and sinker by the American public, its leaders and its

“there is a sucker born every minute”

Enjoy “The Interview” folks but for me I’ll pass and watch a rerun of Bing’s White Christmas.