The Fed Raising Rates? No Way. 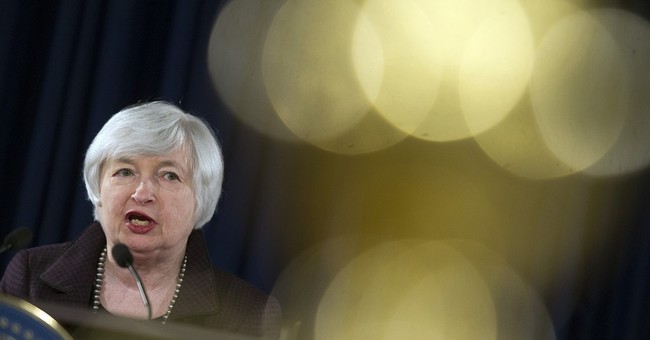 Janet says that the Fed could raise rates at “any moment”. Of course they can and they can cut rates to negative, like the Swiss, at “any moment”. They could also declare no more meetings for the next year. They really can do whatever they please. But raise rates, NO WAY. But it does sound interesting and makes for great headlines.

Janet appears to have put herself in a box on raising rates by saying after “two meetings…any moment”.

Forward guidance is the only real tool in the Fed’s box to reinvigorate a dying economy. We all remember when Ben said no more quantitative easing upon hitting 6 ½% unemployment. Sure, he really stuck by that promise. So, will Janet?

The reality however is this.

Mortgage origination is at historic lows. Do you really believe people are sitting around the table saying the mortgage rates of 3-4% are too low. Why don’t we wait until they get back to more normal rates like 6-8% and then we’ll buy a house? That is mainstream media and sell-side economics think.

The stock market, besides the Fed’s intervention, is continuing to mystify due to the increasing share buyback programs of the many publically traded corporations (Caterpillar, IBM, etc.) The margin buying has been significantly enhanced by the historical low interest rate environment. Raised interest rates will not play well in

Shale oil industry is dangling from a thread after profit margins have all but been eliminated due to the collapse in oil prices. Energy junk bonds are collapsing and fracking CEO’s are employing their bankers and investors to roll over their indebtedness. This was a possibility even with the collapse in oil prices as long as the interest rates stay where they are. A Yellen increase, however, would make the chance of debt rollover somewhere between slim and none.

Finally, the Treasury must rollover bonds, notes and bills on a periodic basis. If interest rates were to rise the cost of our debt would jump dramatically and our debt to GDP would take on the appearance of

It makes for interesting headlines.