Violence to the Right and Left of Us

Bill Murchison
|
Posted: Aug 15, 2017 12:01 AM
Share   Tweet
The opinions expressed by columnists are their own and do not necessarily represent the views of Townhall.com. 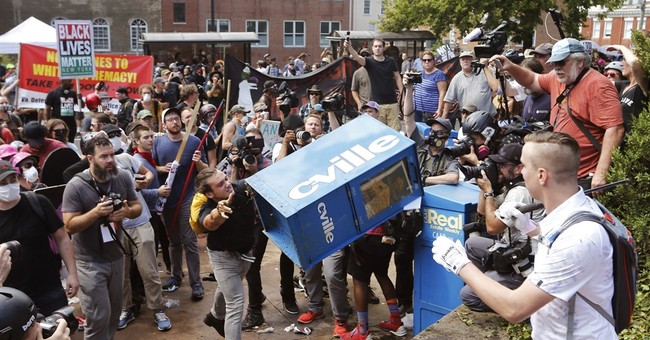 The jury is in, and from the glowering looks on all faces, the verdict appears unanimous: The president blew it. What did he mean, the infamy in Charlottesville, Virginia, could be ascribed to "many sides"? His accompanying condemnation of "hatred, bigotry and violence" fell flat. Where was his specific and grounded condemnation of the "alt-right," whose riffraff came to town looking for a fight and quickly found one?

It is hard even at the best of times to know what goes on in the singularly individual mind of Donald Trump. At present, I'd like to move past the inadequacies of the Trump declaration and try to see what goes on in places more central to the way we actually live in anno Domini 2017.

What goes on around this land we love isn't just a spot of street fighting in the hometown of the university that Thomas Jefferson planted in the name of liberty and reason. What unfolds here is the latest and, in some sense, most disheartening chapter in the disintegration of American culture. There is a point here in serious need of excavation -- too large to dismiss out of exasperation with a president who, in the eyes of many, never says the right thing.

Our memories are frighteningly short if we think Richard Spencer and his merry band of yahoos sprang to life, Athena-like, from the brain of David Duke and went straightway on a rampage. As a culture we've been going wacko for half a century, claiming the right to put individual perceptions -- individual notions, aims and crochets, individual ways of seeing things -- ahead of other people's ways of seeing things. "We're right and you're wrong" is the motif of these times.

In the 1960s protesters took over the offices of deans and college presidents and levelled outrageous demands, unfortified by rational analysis. They swamped streets and public squares as they told the world how right they were and how wrong everyone else was. They lectured and hectored an American establishment they deemed racist, sexist and unworthy to run things. They threw around smug, brainless slogans on the order of "If it feels good, do it." And so the cultural barricades erected over centuries for the protection of sanity and decency, not to mention liberty itself, began to creak and then to crumble. Over a period marked by newer and more personal assertions of privilege -- the right, for instance, to extinguish unborn life -- the territory around us became more and more hospitable to the needs of... well, if you really want to know, the needs of Richard Spencer.

But not just Richard Spencer. No. We now privilege anybody loud, obnoxious and convinced of his special claims to satisfaction: e.g., the "students" at Middlebury College who, earlier this year, drove the eminent libertarian scholar Charles Murray off campus. "Shut up, Charles," they explained. The basis of their outrage? Murray's perceived disrespect for women and minorities, under the ground rules of identity politics. He questions bad decisions both groups have made. But you don't do that -- not without offending the "identities" of groups self-exempted from even the kindest reprimands or helpful advice. That same sad knowledge came last week to James Damore, an engineer at Google who was dismissed by the company for questioning whether men and women share the same disposition for science and math.

None of these activities, one might submit, rises to the level of murder with an automobile, as in Charlottesville. You can't tell, though. In mob scenes, one thing leads to another. The Black Lives Matter demonstrations, with just the right edge of anger and indignation, often turned into street fights with police. A left-wing counterpart to the alt-right calling itself Anti-Fascist Action, or Antifa, has shown an aptitude for violence -- unto the punching of Richard Spencer on presidential inauguration day. Call that "proportional" violence if you like. A larger view of the matter is that violence breeds violence, disregard for the liberty of others inspires general disregard for the liberty of all claimants to be heard.

"No matter our color, creed, religion or political party," the president said last week, "we are all Americans first." He got that right, at least.