Bill Murchison
|
Posted: Mar 07, 2017 12:01 AM
Share   Tweet
The opinions expressed by columnists are their own and do not necessarily represent the views of Townhall.com. 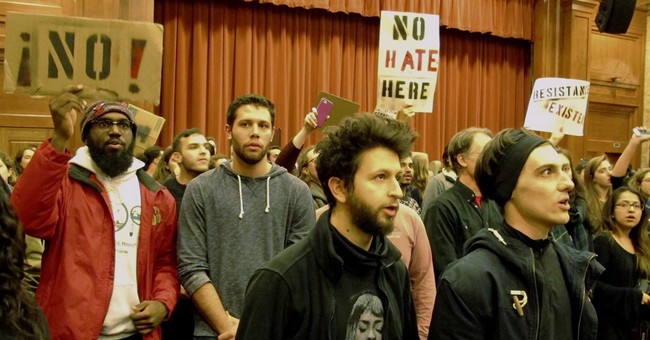 Trending
Wild times, these, in America: students (and some non-students) at Middlebury College driving away a distinguished intellectual with false claims about his "racism"; fiery accusations flooding the land concerning wiretapping and collaboration with the Russian government; name-calling by the present president, directed at his predecessor. And that's just in the last few days!

On and on it goes. I will not enlarge the list, each instance being worrisome enough on its own terms, all the more so when grouped and examined for a common denominator. But I do have a common denominator to propose, and it has nothing to do with election rage. It is that we live today in moral universes of our own construction, where whatever I want -- never mind you! -- is the law of the land. No hearings necessary; no appeals allowed. I'm right; you're wrong.

There's nothing explicitly new about that mentality. History is replete with reports of mob scenes, the most accessible I can think of being Charles Dickens' "A Tale of Two Cities." The revolution is right and just! To the guillotine with the naysayers!

Americans used to see this normlessness more often in the behavior of "foreigners" than in their own lives. In the 1960s, that turned around. We are becoming as normless as anybody else on the planet, the only enforceable norm being that there's no such thing as a norm, no truth obligatory on its own terms, as distinguished from opinions and viewpoints.

Check out the Middlebury mob that silenced Charles Murray with robotic chants, e.g.: "Your message is hatred! We will not tolerate it!" And "Charles Murray's got to go! Hey, hey! Ho, ho!" Lively substantive discourse, huh? Anyway, their point was that Murray, a libertarian scholar of impeccable credentials (including two Ivy League degrees), is supposedly racist, sexist and anti-gay -- none of which resembles the truth. Still, he couldn't speak. All he could do was sit in a car that the protesters rocked and banged on. The implications of this dangerous moment will long reverberate.

Meanwhile, from the depths of the alternate reality he sometimes ambles around in, President Donald Trump, without offering documentation, let it be known (via Twitter, naturally) that then-President Barack Obama had wiretapped Trump during the campaign. What are we supposed to do with this disruptive charge? Is it necessary to weigh such evidence as Trump might bring forth? Maybe belief is evidence. It seems that way these days -- in politics, in education, in the arts, in morals. Especially in morals.

The moral foundation on which America and American beliefs formerly rested has split apart. The floor sags. Our ancestors (and not just our distant kin; our grandparents, too) would find relatively little to recognize in the structure they tended and defended.

At the heart of the American proposition is the unitive belief in moral authority, coupled with the duty, on the citizen's part, of acknowledging that authority -- the rights it insisted upon, the wrongs it sought to repel. You weren't making this stuff up. It was our civilization's heritage, handed down to us for guarding and safekeeping. Fine job we seem to have done with that guarding and safekeeping part!

The issue at hand is not just a matter of free speech in the interest of truth-seeking. The natural law, affirmed alike by Aristotle and St. Paul, was -- is -- about the living of life according to duties, precepts and understandings that lift men and women out of the mud, pointing them toward responsible freedom, there being no other species of freedom worth desiring or, for that matter, capable of lasting.

The moral foundation on which America was established leaves ample room for discussion and debate: no room at all for recklessness in the bringing of charges and accusations, at whatever level of life, or for the suppression of ideas in need of testing.

The alternate-universe confusion into which public discourse is falling is worse than no fun. It loosens civic ties, pits Americans loudly against each other and undermines all prospects for reconciliation and harmony -- short of divine help, that is. It's long been suggested that the Lord takes care of fools, drunkards and the United States of America. At this point, the question is how thin His patience might be wearing.