He's a Conservative! Get the Noose! 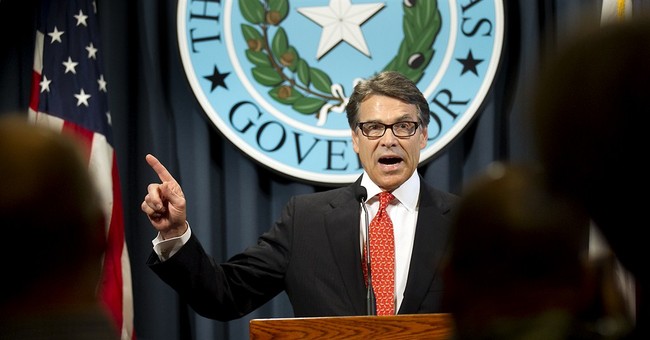 Heavens, no! Insists Michael McCrum, the "special prosecutor" who procured the indictment of Texas Gov. Rick Perry for alleged misuse of his constitutional power to veto legislation. Why, it wasn't about politics at all! The legal case against Perry, which discombobulates such plans as the governor might have for another presidential bid, is grounded, McCrum says, in "the facts and the law, and nothing else."

The prosecutor, if I may be permitted, is full of a commodity long recommended for agricultural enrichment. We may imagine if we like that a grand jury in one of America's most liberal counties concluded, without bias or rancor, that one of America's best-known conservative politicians illegally vetoed funding for that same county's "public integrity" unit presided over by a DA convicted of drunk driving. It was illegal for the governor to use his legal power? That seems essentially the narrative the jury bought from McCrum.

Austin, where conservatives feel like Southern Baptist missionaries in western Iraq, doesn't cotton to a Republican governor who doesn't cotton to the hand-tooled, leather-bound liberal agenda. Nor can the capital city be described as grateful to Perry for his part over the last decade in keeping Texas safe from liberal policies. Democrats hold not one single statewide office in Texas. You can see from any political perspective how the very mention of Perry's name in Austin might bring on dyspepsia, if not angina.

The governor is right to call the indictment "nothing more than an abuse of power." Legal experts appear largely to agree with his claim that "we will ultimately prevail" -- in terms, that is to say, of winning either acquittal or prompt dismissal of a case that holds no air. "One of the laws (cited by the grand jury) is hopelessly vague; the other really doesn't appear to fit," says Prof. Jonathan Turley of the George Washington University, who is a liberal. A Rice University professor, Mark Jones, says, "I can't imagine a jury convicting him on this."

The effects on Perry's presidential possibilities? Who can say? They might fall on account of suspicions floating up from this miasma. They might soar, at least in Republican circles, where Democratic meanness and vindictiveness a la Harry Reid is the sorest of sore points. We shall see. I wouldn't count this guy out of the running by any means. He is a great infighter.

There remains a larger, more tragic point to wrestle with: the one concerning our modern proclivity for handing over otherwise essentially political questions to the care and keeping of the courts. If you can't beat 'em, sue 'em. Vast numbers buy into this shallow, and yet deeply damaging, mode of political analysis.

Perry's opponents in Texas know very well -- they should! -- that he is too much for them. He wins elections. He persuades Texas voters of his superiority -- especially in the philosophical sense -- to the state's woebegone liberals: no better positioned than they were 50 or 60 years ago to raise taxes for redistributive purposes and tighten business regulations. What's left but to trump up some bush league allegations about the governor's behavior and take them to court?

And so we criminalize political differences. If you don't agree with me, you must be a crook! So the "reasoning" goes. Two decades ago the same prosecutorial unit whose funding Perry vetoed went after Sen. Kay Bailey Hutchison, only to lose in disgrace. In Wisconsin, Democrats claim Gov. Scott Walker illegally used staff resources for campaign purposes. In Washington, D. C., Iraq war opponents claimed the scalp of a Dick Cheney aide, who they said (falsely, it turned out) had blown the cover of an undercover CIA agent who was married to a figure at odds with the Bush administration over -- oh, forget it. Less and less is justice the purpose of these political prosecutions; more and more, it's just politics.