The President And The Customers 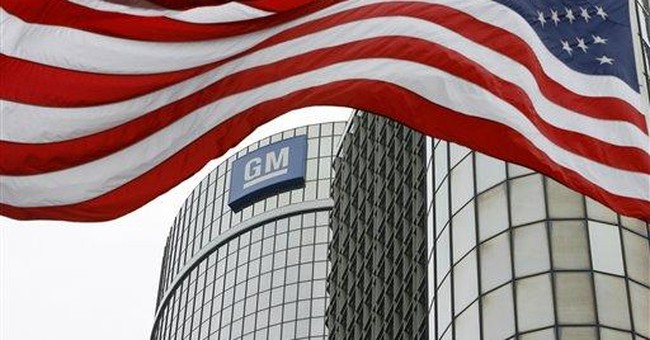 The reason capitalism works and government doesn't is ….

Let's hold that consequential thought for a moment. Hats must come off first in memory of General Motors. Recollections of Engine Charlie Wilson stir -- Wilson, who, as GM president, took a public hammering when he ventured accurately that what was good for the country was good for GM "and vice versa." He didn't mean taxpayer-financed ownership and bureaucratic oversight. He meant profits and prosperity -- objectives the old GM, for all its faults, made ample and widespread.

Charlie wouldn't know what he was looking at today if he saw his old company sporting government shackles.

President Obama is upbeat about the new GM he is helping to engineer. The President -- alas -- is full of beans when it comes to understanding free market economics. Perhaps only a product of the Ivy League would share his conviction that government control is good for you.

It is a conviction that has come to define the Obama economic policies, ponderous as they are, when it comes to the direction of affairs. The President is a decent speechmaker, but in economics, his oratorical exuberance can outrace his understanding of how entrepreneurs and their customers actually function.

The new government-owned GM, according to Obama, is ready for "a viable, achievable plan that will give this iconic company a chance to rise again." While they wait for it to happen, Americans should keep a tight grip on their wallets.

Who's running this show? Not the marketplace. The government -- a different enterprise altogether -- is running this show. The government represents collective judgment: the judgment of committees subject only occasionally to reproof for misreadings and mistakes. The marketplace is a great, surging beast, never at rest -- with hundreds of millions of noses, pairs of ears, sets of hands and arms. And brains – those, too. All these instrumentalities clamor for satisfactions of different kinds: looks, quality, style, durability, isolated or existing in shifting combinations.

The Democrats who rule Washington, D.C., know what America needs. We know they know because they tell us so. We need -- they say -- a health care system with far more uniform characteristics than the one we have now. We need -- again, they say -- energy sources more in keeping with the ethic of conservation. We also need, it seems, new kinds of cars -- here we segue into the General Motors nightmare -- with higher gas mileage and, consequently, larger price tags.

We need. That's the Democrats' mantra. They know. What the rest of us know isn't of much account. Except, to be sure, when the car showrooms open one of these days with the revamped GM models that fit Democratic conceptions of our needs. The Democratic theory is that we'll rush in to buy. Maybe. Also maybe not. What if we don't like the cars the government gives us? What if we like privately owned Ford Motor Co.'s cars better? What if we like -- gasp -- Toyota's better, or Honda's, or someone else's? What if we prefer SUVs to compacts?

The one proposition one can bank on, when it comes to the marketplace, is that consumers won't buy what they're merely instructed to buy. They'll buy what they want. They'll judge for themselves, no politicians needed, no bureaucrats, no bureaucrat-worshiping journalists, no presidential orators.

When Engine Charlie Wilson memorably aligned the interests of America and GM, he saw both as driven by the same desires, the same itches, the same sense of opportunity. Even if GM is changing, it seems doubtful the customers have. The kind of change we probably still can't believe in is the kind that assigns to Americans sheep-like gullibility as to how to live and buy.