Democratic Tax-Cutters On The Loose 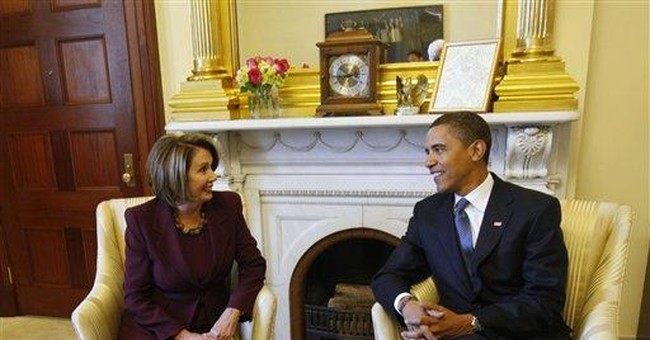 Left-wing bloggers won't be happy to find men and women of the right celebrating the Democrats' stated intention to make tax cutting a key element in their economic recovery program.

It's reported that President-elect Obama and his congressional allies support lowering taxes by approximately $300 billion as part of a two-year, $775 billion stimulus program previously viewed as too heavy on make-work spending.

The professional economists will dilate on the shape and size of the plan, which, as of now, would give tax credits for job creation; extend a Bush-initiated provision shortening the period for depreciation of new equipment; use last year's losses to reduce tax liabilities in previous years; and, for most individuals and families, reduce taxes by up to $1,000.

"Tax cuts for the wealthy"? To see these relatively mild proposals as such, most fans of big government would have to stand on their heads and screw their eyes in dramatic ways.

The apparent idea behind the Democratic plan is the encouragement of spending and investment. A related idea is the quelling of potential Republican objections to the size of the spending plan by the concession that, well, hmmm, ahem, it can make sense to encourage the flow of money through private rather than public hands.

Who cares, in this case what motivates the thinking of Barack Obama and Nancy Pelosi so long as they acknowledge, even tacitly, the beauty of incentives (read carrots) as opposed to punishment (read sticks).

Incentives haven't had much of a cheering section lately. There hasn't been the occasion. First there was the presidential campaign, in which it became obligatory for Democrats and their backers in the mainstream media to portray low, or lowish, tax rates as a gift to the haughty rich and a cause of growing "inequality." Then there was the financial crisis, during which plenty of the haughty rich came to look like idiots, if not thieves. It's hard in such a climate to talk common sense about taxes, but common sense about taxes is what has to be talked.

A vibrant economy -- the kind we are scrambling to rebuild -- gets that way by making work and investment pay off for workers and investors. This you achieve by cutting taxes.

The need to squash Bernie Madoff (assuming a jury finds that he merits squashing), and to exact revenge on his fellow plutocrats, isn't the question before the house. The issue of regulation is separate -- or at any rate can be separated with some dexterity -- from the issue of incentives.

Possibly the easiest way to achieve this end is by noting that, in economic terms most people don't do more for less. They do more for more. When the government's share of their reward (i.e., pay and profits) gets unreasonably large, many, if not most people tend to relax, hold back, withdraw. We went through all this in the '70s. High taxation was depressing the level of work done throughout the economy. Underground dealing and personal dishonesty flourished. The Reagan administration cut taxes. Work and investment soared. In due course the economy bounced back.

No one expects Democratic Washington to sit still for "tax cuts for the wealthy," as broad-based cuts usually get labeled by editorial writers, TV commentators and liberals running for office. But the Wall Street Journal is right to note that "The Obama tax-cut proposals, if enacted, could pack more punch in two years than either of President George W. Bush's tax cuts did in their first two years" -- $300 billion versus $174 billion.

I propose we don't look a gift horse in the mouth. There's a precedent to be set here -- the admission by a governing body not exactly composed of Reaganite supply-siders that, yes, indeedy, tax cuts can work for the general good. Upon that admission renewed respect for common sense in taxation can be engineered. At the same time economic recovery gets a boost. No bad bargain, this.