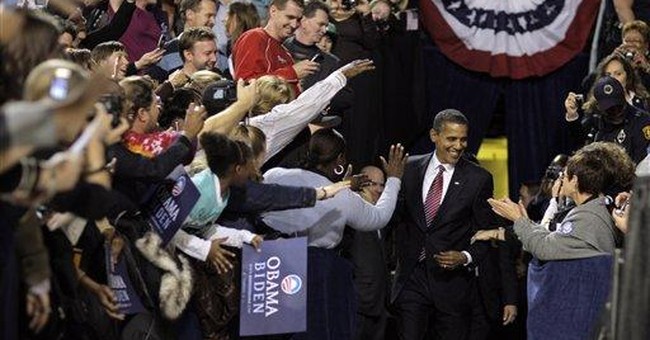 I can't at this point think of anything new to say about the election. Here's something old, in that case: McCain's the one, and not just because, when it comes to "old," he qualifies.

Well, yes -- the age thing, too. Many of us like our presidents with a liver spot or two, and perhaps a hesitation in the gait: reminders of experience and mortality. The nearest we get to such things this year is Joe Biden, age 66, and himself a reminder that no formula is foolproof.

Say this for McCain in the comparative experience department: He's been around long enough to do a few things and think a few thoughts. Compare him to Barack Obama. What Obama has done besides push himself forward, what he thinks about besides his own duty to go forward I don't know.

It is an extraordinary thing: We stand on the verge of handing the world's most powerful secular office to a man about whom we know comparatively little. We know so little because his life has no narrative thrust except in terms of his constant thrust to to what? Lead? Yes, but if we admit that, another question arises: Lead where, and to what end? And how well?

I wrote a few months ago that no presidential nominee of a major party has come to us for a long, long time with credentials slimmer than Obama's, except perhaps Wendell Willkie, a previously unheralded utilities lawyer whom the Republicans thrust forward in sheer desperation over the prospect of a third term for Franklin Roosevelt.

How Willkie might have governed had he won, we never actually had to learn. He lost. Obama seems unlikely, barring a miracle, to lose. We'll then find occasion upon occasion to see what numbers -- snake eyes or boxcars -- our national roll of the dice produces. We plain don't know. At a moment of economic and geopolitical peril, we prepare to hand the steering wheel to a man we're not even sure has a map or driver's license.

The onrush of words from Obama's mouth should not distract us, even though it distracts tens of millions. First, we haven't seen him in action, as we have many times seen John McCain. Obama, I keep vainly pointing out, hasn't done anything. He's the Music Man, telling us of the trouble right here in River City -- as if we didn't know! -- and offering to pull us out of it. We gape and nod.

Oh, yes, those speeches, those policy papers. Don't those tell us what to expect under an Obama administration? The troublesome part here is two-fold.

First, the Obama agenda, spin it how you will, is government behind the steering wheel I just mentioned, private industry and initiative in the passenger seat, if not the back seat. Obama has designed on paper a program (health care, energy, taxes, investment, etc., etc.) that, if duly enacted would make Americans more dependent upon their central government for happiness and prosperity (if any) than until recently we can have believed possible. Of course, future Congresses could theoretically unravel that dependency, but why put them to the trouble and anxiety?

Second -- here I go again -- not even David Axelrod can be sure he knows how Obama would fare in the mega-pressure chamber to which he begs admission. Has he, in fact, legislative and executive skills? Colin Powell doesn't know. Christopher Buckley doesn't know. The editors of the New York Times don't know. I make bold to say no one knows. We can intuit anyway who ends up running the show if the man nobody really knows should fall on his face. I speak of Nancy Pelosi, Barney Frank and Harry Reid -- names I invoke not for emotive purposes but rather to suggest the stakes in the great dice-roll we contemplate.

The imperfections of John McCain, and of his candidacy, fade into insignificance against the recklessness inherent in choosing Obama: a recklessness that may be set, so to speak, in concrete. Though many still hope not, and with wonderful reason.