Betsy McCaughey
|
Posted: May 25, 2022 12:01 AM
Share   Tweet
The opinions expressed by columnists are their own and do not necessarily represent the views of Townhall.com. 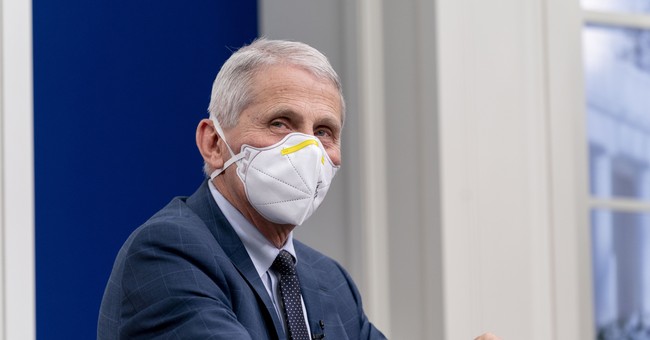 Beware of totalitarian control of scientific and medical thought here in America. Prominent academic publications, medical organizations and even some state legislatures are trying to silence scientific disagreements about COVID-19. That will kill medical progress.

On Friday, Anthony Fauci, the face of the federal government's COVID response, urged graduates at Roger Williams University in Rhode Island to stand up against disinformation and "the normalization of untruths" about COVID-19. Let's hope graduates were too busy tossing their mortar boards skyward to heed Fauci's dangerous advice.

It's dangerous because there is no such thing as scientific certainty about COVID-19 or any other disease. Challenging scientific consensus is not "disinformation." It's how medical breakthroughs happen.

Today's unorthodox treatment might become tomorrow's lifesaving standard of care. Crushing scientific dissenters is a sure way to halt medical progress in its tracks.

Fauci claimed recently on national television that those who criticize him are "really criticizing science because I represent science." His egotism is enormous, but the problem is bigger than just Fauci.

The American Medical Association voted in November to target health care professionals who "peddled untested treatments and cures, and flouted public health efforts such as masking and vaccinations." Warning about "disinformation," the AMA called on state medical boards to suspend or revoke the offenders' licenses.

A Nature Medicine review article decreed on March 10 that "the spread of misinformation poses a considerable threat to public health and the successful management of a global pandemic."

Scientific progress has always been a struggle between the status quo and those who challenge it and seek new knowledge.

When Galileo advanced Copernicus's idea that Earth revolves around the sun, he was labeled a heretic by the astronomical establishment and the Catholic Church and put under house arrest.

When Hungarian physician Ignaz Semmelweis observed that women were dying in childbirth because physicians in the obstetric hospitals were not washing their hands, physicians took offense. He was committed to an insane asylum in 1865 and died there, a victim of the establishment's censorship. His research showed that hand washing with chlorinated lime could reduce deaths below 1%, but its importance was not understood at the time.

Fast-forward to the 1980s, when the AIDS virus began to spread rapidly in the U.S. Fauci led that research effort. It was the beginning of an explosion of new treatments.

Yet two years ago, when COVID-19 struck -- a disease as unfamiliar as AIDS was in '80s -- the impulse among government health officials was to suppress experimentation and debate.

Democratic lawmakers in California are pushing to require the state medical board to penalize doctors for spreading "misinformation," defined as disagreeing with government bodies like the Centers for Disease Control and Prevention or "contemporary scientific consensus."

As Wall Street Journal's Allysia Finley points out, that would mean legal penalties against doctors who prescribe drugs like the antidepressant Fluvoxamine, which has shown strong results in clinical trials even though it is not yet Food and Drug Administration-approved for use expressly against COVID-19.

The standard of care to save COVID-19 patients has evolved rapidly, explains Finley. At the outset, doctors put severely ill patients on ventilators, where as many as 90% died. Soon, some doctors tried oxygenating patients with high-flow nasal tubes instead, and that succeeded. Should those doctors have been penalized for trying an alternative?

In October 2020, three distinguished scientists from Harvard University, the University of Oxford and Stanford University published the Great Barrington Declaration, arguing that economically devastating lockdowns being imposed across the U.S. and Europe would save fewer lives than precautions targeted at the elderly and medically fragile only. Yet they were right.

Nothing, not even a virus, is as dangerous to our future health as this silencing of medical debate. All of us, of every political persuasion, must denounce it for our own sakes.