If Only the GOP Had Nominated a Conservative Dogcatcher in Alabama

Bernard Goldberg
|
Posted: Dec 19, 2017 12:01 AM
Share   Tweet
The opinions expressed by columnists are their own and do not necessarily represent the views of Townhall.com. 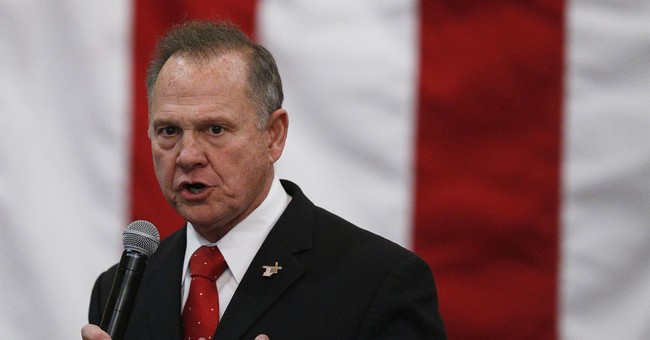 In the entire ruby-red state of Alabama there was only one reliably conservative Republican candidate who could have lost the race for the U.S. Senate to a Democrat portrayed as a Nancy Pelosi and Chuck Schumer liberal. And Roy Moore was the guy.

Moore was a disaster even before allegations came out that as a grown man he was running around with teenage girls. He had been bounced twice from the Alabama Supreme Court for refusing to follow orders from federal courts, one of those courts being the Supreme Court of the United States.

Moore thought homosexuality should be illegal. He thought Barack Obama was not born in the United States. He said that Ronald Reagan's description of the Soviet Union as "the focus of evil in the modern world" could be applied to the United States today, because "we promote a lot of bad things," such as "same-sex marriage." And he suggested that 9/11 might be the result of what he believes is America's shift away from God.

And when the allegations about his relationships with young girls came out, that was the last straw for a lot of Alabama voters, shattering a stereotype held by many snobby liberal elites: that just about everyone who lives in that part of America is a hayseed who walks around without shoes. The voters of Alabama showed them and anyone else who was paying attention that character still counts -- a point ridiculed by those same liberal elites back when they circled the wagons around Bill Clinton despite a long list of credible sexual misconduct allegations against him.

Maybe Roy Moore will now just go away. But given his long record of bad judgment, don't count on it.

And it's no secret that Judge Moore wasn't the only loser in the Alabama election. So were Steve Bannon and Donald Trump.

For Bannon, Roy Moore was to be his shining Exhibit A, his victorious candidate who was going to be the first of many other Bannon-molded candidates who would deliver one deathblow after another to the GOP establishment. After Moore's big win in Alabama, Bannon was going to lead the charge against every other Republican candidate he didn't think was pure enough. Now that it didn't work out the way he planned, let's see where Steve Bannon goes from here. Far, far away would be a good start.

As for Donald Trump, a man who worships at the altar of "winning," this is the third time in the last few months that he's backed a Republican candidate for statewide office... who lost. First it was in the Virginia governor's race. Then it was in the Alabama primary. Then the president went all in for Roy Moore. Though in fairness, had the sainted Bear Bryant come back from the great beyond, even he might have had a hard time getting Roy Moore across the goal line with all the baggage Moore was lugging around.

So what comes next for the Republican Party, with the 2018 midterm elections less than a year off? A hard look at how Doug Jones, the Democrat, won won't provide a lot of comfort for the GOP.

According to exit polls, women went for Jones 58 percent, compared with Moore's 41 percent. Nonwhite voters, mostly African-Americans, voted 88 percent to 11 percent for Jones over Moore. And 60 percent of voters under the age of 30 went for Jones, while just 38 percent went for Moore.

Democrats will try to ride that trifecta -- of women, minorities and young voters -- to victory in congressional races all over the country next year. That doesn't mean they'll take control of either the House or the Senate; to do that, they'll need a lot more than a victory in Alabama on an Election Day when more than a few Republican voters stayed home. But if a Democrat can win in a state as conservative and Republican as Alabama, if a Democrat could convince so many suburban Republicans to abandon their party, anything is possible.

Of course, if Roy Moore had won, Democrats would be hanging him around every Republican's neck in the coming elections. So the Republican Party wasn't really going to be celebrating even if he had won in Alabama. But then, if the GOP had nominated a county dogcatcher with conservative credentials instead of the political equivalent of a toxic waste dump, we wouldn't be discussing any of this today, would we?