Time to Defund the United Nations

Ben Shapiro
|
Posted: Dec 27, 2017 12:01 AM
Share   Tweet
The opinions expressed by columnists are their own and do not necessarily represent the views of Townhall.com. 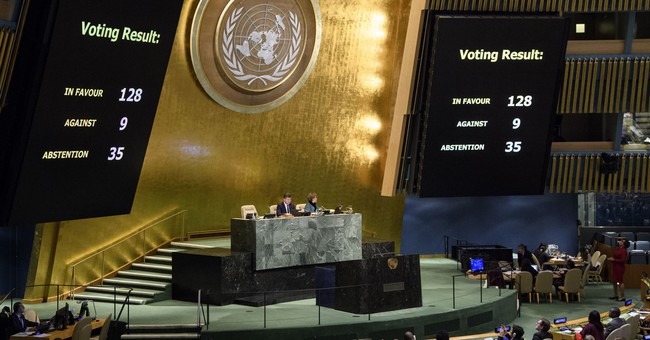 Last week, Democrats and many in the mainstream media became highly perturbed by the Trump administration's suggestion that the United States might tie continued foreign aid to support for its agenda abroad. Foreign dictators agreed. Turkish President Recep Tayyip Erdogan, who spent the last year arresting dissidents, announced, "Mr. Trump, you cannot buy Turkey's democratic free will with your dollars, our decision is clear."

Herein lies the great irony of the United Nations: While it's the Mos Eisley of international politics -- a hive of scum and villainy -- and it votes repeatedly to condemn the United States and Israel, the tyrannies that constitute the body continue to oppress their own peoples. Among those who voted last week to condemn the U.S. for recognizing Jerusalem as Israel's capital and moving its embassy to Jerusalem were North Korea, Iran, Yemen and Venezuela. Why exactly should the United States ever take advice from those nations seriously?

We shouldn't. And we should stop sending cash to an organization that operates as a front for immoral agenda items.

Meanwhile, the U.N. has done nearly nothing with regard to Syria. It has instead suggested that Israel turn over the Golan Heights to the Syrian regime. The U.N. can't even successfully prevent the slaughter of the Rohingya in Myanmar. But they certainly have something say about whether the United States ought to recognize Jerusalem as Israel's capital.

One of the great lies of the Obama administration was that diplomacy is a foreign policy. We often heard from it that the only two alternatives were diplomacy and war. That was the stated reason for pursuing a one-sided nuclear deal with Iran that left Iran with burgeoning regional power and legitimacy. "What? Do you want a war or something?" it asked.

But the moment that the Trump administration uses tools of diplomacy, including financial pressure, to achieve American ends, the left complains. Would it prefer war? Diplomacy is a tool, not a foreign policy, and the use of diplomacy to pressure other nations to follow our lead is not only smart but also necessary. That is why the Trump administration was exactly right to negotiate a $285 million cut to the U.N.'s budget. Now we ought to slash our contributions to the counterproductive organization, since we pay one-fifth of the total bill.

The U.N. has always been a foolish fantasy, a League of Nations knockoff that's been about as productive and twice as irritating. It's an outmoded organization that's outlived whatever small usefulness it once had. There's no reason for us to continue cutting checks to prop up regimes that condemn us publicly for exercising the most basic standards of morality.

Here's a Three-Word Policy That's Been Effective in Stopping School Shootings
Matt Vespa
'Sick Son of a Bitch' Beto O'Rourke Crashes Uvalde Press Conference
Spencer Brown
Here's the Only Red Flag We Knew About the Texas Shooter...But It Wouldn't Have Made a Difference
Matt Vespa
And This Is Why NBA Coaches Should Zip It When It Comes to Politics
Matt Vespa
Biden Makes New Push For Gun Control
Katie Pavlich
Texas Shooter Was Known to Police
Katie Pavlich