Can the Super Bowl Save America?

Ben Shapiro
|
Posted: Feb 08, 2017 12:01 AM
Share   Tweet
The opinions expressed by columnists are their own and do not necessarily represent the views of Townhall.com. 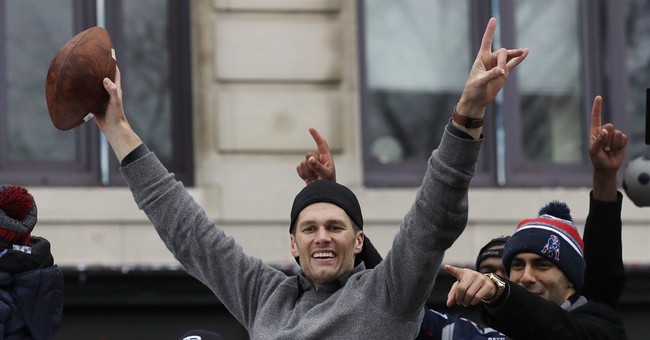 Trending
It's been several decades since American politics has been so contentious. According to a Reuters/Ipsos poll taken after President Trump's election, 32 percent of California residents want the state to secede from America. In the middle of the election cycle, Public Policy Polling found that 40 percent of Texans would have wanted the state to leave the country if Hillary Clinton had won -- and that included 61 percent of Trump supporters. Nationally, 22 percent of people now want to see their particular state leave the union.

All of this is pervading our private lives. One post-election survey showed that nearly 1 in 3 Democrat women have cut someone out of their lives on social media over Trump's election. A September poll from the Monmouth University Polling Institute found that 70 percent of Americans think the election cycle has made America worse.

But we've been able to get together on some things.

We seemed to put aside political differences during the World Series, for example. That communal event -- sitting around our televisions watching the greatest Game 7 in baseball history -- seemed to unify us. The same thing happened this week with the Super Bowl. We all got together and watched Tom Brady give a performance for the ages, and for a short moment, we got along.

So, here's the question: Is that moment a chimera?

I've long been an antagonist of the notion that bouncing balls can somehow heal real political divisions. In 2007, I wrote this about the World Cup, saying: "Sports solve no great moral dilemmas. Sports are not politics."

But sports can provide a breath. Sometimes that breath is actually counterproductive -- you wouldn't want a sporting event in 1944 between the United States and Germany to have delayed the liberation of the Nazi death camps by a week. But in America, that breath is highly necessary.

That's because the left has spent so long politicizing every element of American life that we're going to need some space, either physical or temporal. Americans seem willing to part from their neighbors because they believe their neighbors are in a heightened state of readiness to bother them. Texans think Californians want to control how they raise their children; Californians think Texans want to dirty their air. Federalism normally provides the distance for both sides to leave each other alone. But our common culture has shrunk that distance. Now you can't turn on the TV in Dallas without hearing a Los Angeles point of view.

The Super Bowl provided that distance. Thanks to President Trump's election, the Super Bowl organizers clearly recognized -- for once -- that they'd be best off eschewing politics rather than enabling Beyonce to dance around in Black Panther gear. Lady Gaga did an apolitical halftime show. The game was great. The politics were relegated to easily debunked commercials.

And we all took a breath.

Hollywood and pop culture would do well to remind themselves that if they don't want to alienate half their audience and exacerbate our differences, they can allow us room to breathe. The Super Bowl did that this year. For that, we should be just a little grateful, even if it didn't solve any true underlying problems. Those will require a bit more time and a bit more space.