The Leftist Tree Must Be Watered With Blood at Mizzou 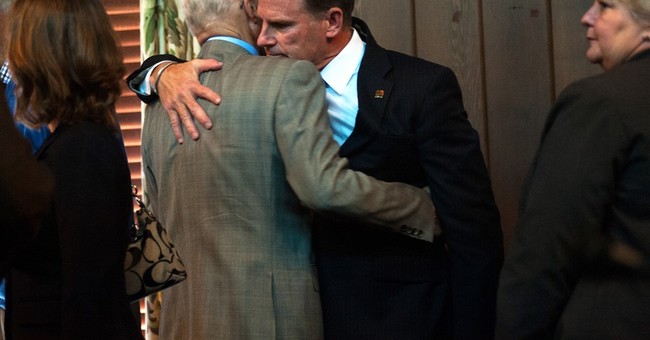 University of Missouri President Tim Wolfe must wonder what he did wrong.
It all began back in September when the black student government president complained that a racist drove by in a truck and allegedly called him a racial slur. Then, in September, a group of black students said that a drunken white racist shouted a slur at them, too.
Ugly, of course. But in any normal world, without further evidence of the incidents, life would have gone on -- occasional ugliness from ugly people is a feature of living on Earth. But that wasn't good enough: somehow, Wolfe had to be held responsible, according to the student body. The election of a black student government president was less representative of the campus climate than a couple of shouted names. Thus, the radical group Concerned Student 1950 shut down the university's homecoming parade, then surrounded Wolfe's car and tried to force him to get out. When he refused and called the police, they protested him as a racist.
And, like a good little leftist, Wolfe apologized. "I am sorry, and my apology is long overdue," he said. "My behavior seemed like I did not care. That was not my intention."
That did not appease the baying crowd, however.
One graduate student began a hunger strike for no apparent reason. But Wolfe continued to scrape and bow before those who would have his head, saying of the would-be revolutionary, "his voice for social justice is important and powerful. He is being heard and I am listening. I am thankful for the leadership provided by him and the other student leaders in raising awareness of racism, injustice and intolerance."
Still not good enough.
The Concerned Student 1950 group released a demand letter. They wanted Wolfe to show them a handwritten letter -- not typed, mind you -- admitting his own "white privilege." Such privilege apparently included the distinct honor of being fired for his skin color while being forced to maintain that his position is advantageous due to his skin color.
On Friday night, a group of students accosted him at an event, reading him the riot act about the chimera known as "white privilege." He stated, "Systematic oppression is because you don't believe that you have the equal opportunity for success --" At this point, one of the students began screaming at him, accusing him of blaming black students for their own feelings of alienation. Which, given the evidence, would have been a solid accusation. But Wolfe didn't even make it.
Then, 30 black members of the football team -- many of whom were on athletic scholarships provided for them despite academic underachievement -- announced they wouldn't play football so long as Wolfe remained. The white coach of the team, who earns $3.1 million from the taxpayer-sponsored university, joined the protest. He was not accused of "white privilege."
Finally, on Monday, Wolfe resigned. He said, "It is clear to all of us that change is needed, and we appreciate the thoughtfulness and passion which have gone into the sharing of concerns." Such thoughtfulness apparently included shouting down members of the media and blocking them from covering protests.
But with Wolfe's career in tatters solely due to his race, President Obama's White House finally stepped in -- not to defend a fellow liberal administrator, but to praise the rabble rousing students. White House press secretary Josh Earnest said that this was the sort of activity Obama talked about "in his campaign, that a few people speaking up and speaking out can have a profound impact on the communities where we live and work."
Community organizing on a national scale. President Obama's vision has finally reached fruition. And because the tree of leftism must occasionally be watered with the blood of liberal authority figures, Tim Wolfe is out of a job. But no big deal. Such are the wages of "white privilege."

CARTOONS | AF Branco
View Cartoon
Here is Biden’s Schedule for the Weekend
Katie Pavlich
The Goalposts Keep Moving: CDC Director Says the Definition of Fully Vaccinated May Change
Leah Barkoukis
Biden State Department Admits: We're in Touch with Hundreds of US Citizens Stranded in Afghanistan
Guy Benson
This Is Who Dr. Fauci Blames for the Rise in Deaths Among Adults in the UK