How the West Won the Great Hashtag War of 2014 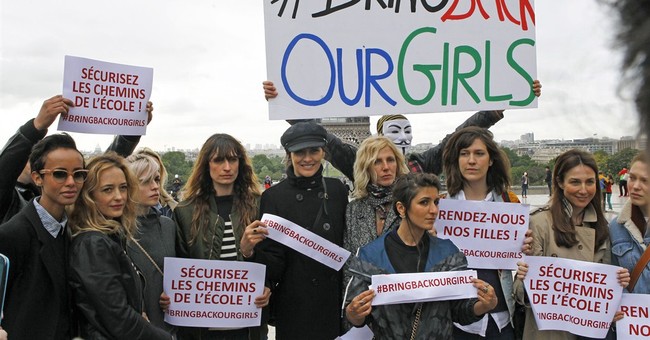 This week, a picture emerged of Islamist terror group Boko Haram's leader Abubakar Shekau holding a machine gun in one hand and a piece of paper in the other. On that paper was scrawled: "#WeSurrender."

Thus came to an end the Great Hashtag War of 2014.

Led by the bravery of First Lady Michelle Obama, former Secretary of State Hillary Clinton and the Democratic women of the United States Senate, the West tweeted Boko Haram into submission. When Obama released the H-bomb of twitter -- a sad duck-faced picture of herself in an empty room holding a sign reading #BringBackOurGirls -- total victory was achieved: 276 Nigerian girls who had been kidnapped and converted to Islam avoided sale into sex slavery, and the 150 Nigerians murdered by Boko Haram just last week suddenly sprang back to life.

No wonder the Obama State Department has saluted the Power of Hashtag. If only we'd discovered it earlier, we could have saved tens of millions of lives. If the French had only utilized the #MaginotLine instead of the Maginot Line, the Nazi jackboots never would have clip-clopped along the Champs-Elysees.

Now, there were those who argued that hashtagging by world leaders was not merely useless but counterproductive. They argued that hashtag foreign policy projected a sense of Western impotence combined with an overweening sense of unearned moral superiority that comes from sounding off in public. They said that when a former secretary of state neglected to label Boko Haram a terrorist group during her tenure, but tweeted out #BringBackOurGirls, that demonstrated the pathetic weakness of the Obama administration. They opined that it was one thing for powerless people in Nigeria to push a hashtag campaign in an attempt to prompt action from authorities, but quite another for the authorities themselves to ignore action in favor of hashtagging.

But that missed the point: Awareness was raised. People in authority demonstrated their outrage at kidnapping and sex slavery. Not enough to actually do anything useful, of course, but enough to publicly express that outrage. And now that we all know their feelings on the subject, we can go home happy.

As it turns out, the proper solution to a plea for help is to amplify that plea rather than to help. By doing so, awareness is raised, consciousness is increased, chakras are released. The Power of Hashtag reigns supreme.

The best news of all: You were there. You were part of the Hastag War. We will be thankful for that years from now, when we're sitting by the fireplace with our grandchildren on our knees, and they ask us what we did in the great Hashtag Wars, we won't have to cough, shift them to the other knee, and say, "Well, I tweeted about Solange and Jay-Z."