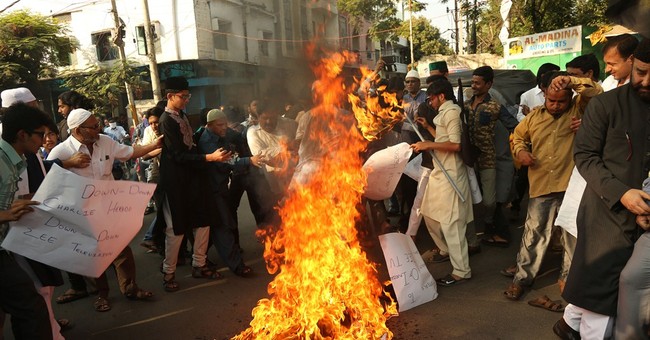 In an apparent example of leading from behind, while using the Christian-based National Prayer Breakfast as cover, Barack Obama invoked a misplaced moral relativism which serves to distract from the latest Islamist atrocity – human immolation.

Our Commander-in-Chief is, in effect, the friend of a fifth column.

Whether he’s acting knowingly or not, the Islamists must think that they have an ally leading from behind enemy lines.

Citing slavery, the Crusades and the Inquisition, Obama’s remarks were an unseemly attempt to excuse the inexcusable. Occurring at an assemblage of the Christian community, it’s his worst slap yet at the faith most Americans “cling to.”

And in the space of two certain sentences, the number of improprieties his comments contained was striking.

His words have inspired a flurry of refutations: about the difference between current events and ancient history; about Christian atrocities being an aberration to the faith while Islamist violence is condoned in their literature – in perpetuity; about the fact that more than 400 years of Muslim murder and conquest preceded the Crusades; that the Islamists slaughtered in one day on 9/11 roughly the same number that the Inquisition killed in a span of centuries; and that Obama’s reference to slavery was spoken to members of the religious tradition most responsible for its abolition.

It’s hard to imagine a more unmindful diatribe. The man is either tone deaf or worse – deliberately in your face.

But what’s been less well-commented on is that these many Islamist atrocities include the very behaviors which incurred God’s judgment during biblical times – and, if there’s justice in the universe, must ultimately again.

In addition to using the Crusades and the Inquisition to excuse their abhorrent behavior, Islamists and their apologists also cite the actions of the ancient Israelites during the conquest of Canaan.

But aside from the passing of 3500 years (isn’t there a statute or something?) there are other extraordinary contrasts between occurrences then and now.

According to the Scriptures, God was not capricious or hasty in his indictments, allowing centuries of detestable practices to occur before finally bringing his judgment to the Canaanites by the hand of the Hebrew tribes. And one of those practices is the same offense which the parents of suicide bombers are guilty of today: child sacrifice. The Lord did not take lightly to such abomination back then and there’s no reason to think that the One whom all these religions are supposed to revere has developed any more tolerance for this unspeakable evil.

And another ancient evil can be torn from today’s headlines. The most common death for those ancient victims of child sacrifice was being burned alive.

It would be much preferred if our president would speak against the appalling persecution befalling Christendom in our day at the hands of radical Islam – including more crucifixions than have been seen in centuries – instead of dredging up the anomalous behavior of wayward crusaders which was never condoned by the church.

But it seems that Obama’s intent is to disparage the US and to rationalize away the plight of Christians worldwide.

And there’s a final irony worth noting from his National Prayer Breakfast speech that’s either ignorant or deliberate: his admonition to a group of Christians against getting on their high horse.

Since before the time of the Crusades, under laws of dhimmitude in Islamic societies, Christians and other non-Muslims were forbidden to get on a horse.