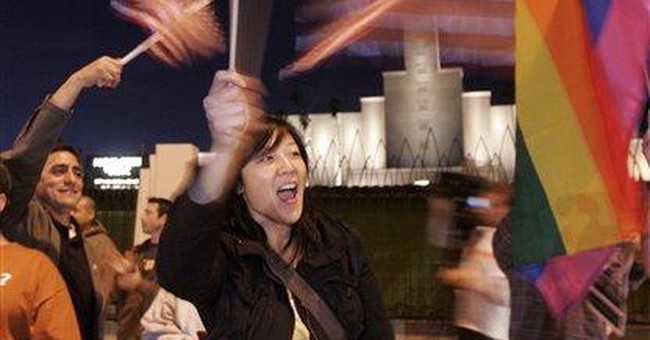 On the whole, there shouldn’t have been a surer thing than the defeat of Proposition 8 in the California elections last month.

The activists pressing for the approval of same-sex “marriage” had all the heavyweights on their side of the issue:  major corporations, big money, the media, the Hollywood elites, the California Teachers’ Association and the university big-wigs, the governor and the attorney general, and a fair portion of the legislature.  Even the state’s high court climbed into the ring, ignoring past election results to legalize same-sex ceremonies in a controversial decision last spring.

Going into November, activists promoting the same-sex agenda were giving defenders of marriage a public pounding that even boxing legend Jack Dempsey might have found impressive.

And yet …the activists lost.  What’s more, they’re still losing—giving up round after round in the crucial post-election bout for public sympathy.  And curiously, they’re losing for the same reason the powerful Dempsey lost his heavyweight title fight in 1927.

Boxing fans had waited a year for the rematch between the brutal “Manassa Mauler” and the nimble “Fighting Marine” Gene Tunney, who had won an upset victory against the legendary, savage Dempsey not by knockout, but on points.  Now, Dempsey wanted his title back—and in no time, the rematch found Tunney lying dazed and face down on the mat.

And that might have been it…except for what became known as “the long count.”

New rules required boxers to retire to a neutral corner once their opponents were down.  Only then could a referee start the 10-second count.  But Dempsey was famous for looming over a fallen opponent, waiting to pummel him if he dared get to his knees.  And that’s what he did now, despite the ref’s warning.

Long seconds ticked by before Dempsey stormed to his corner…and by then, Tunney had regained his senses.  Staggering to his feet on the ninth second of the ten-count, he came back to beat Dempsey again.

There’s a lesson there for activists who are, if anything, less willing than Dempsey to go to a neutral corner and await the judges’ decision.  Faced with election results they don’t like—and stung by the upset victory of their opponents—they’ve come out swinging, filing no less than six lawsuits to have the election results nullified and attacking their foes outside the courtroom, too.

By doing so, they’re putting themselves and their cause down for the count in the eyes of a growing number of their fellow citizens.  As more and more stories of retaliation and vicious persecution crowd the evening news and morning paper, you can almost hear people counting off reasons to look twice at those who’ve portrayed their cause as a monument to “tolerance”:

One … blacklisting.  The activists have laid hold of a list of those who donated to Proposition 8’s defense, and they’re using those lists to intimidate, ostracize, and bully individual citizens and business owners.  Some establishments have been effectively closed down by protesters, while a number of employers have succumbed to outrageous pressure to fire workers who merely exercised their God-given rights to speak freely and support the proposition.

Two … denigrating Christians and the Bible.  In defending a recent error-ridden Newsweek cover story on “The Religious Case for Gay Marriage,” editor Jon Meacham joined many same-sex “marriage” activists in contriving to prove that, by denouncing homosexual behavior, the Bible is actually endorsing it—although the Bible is not to be trusted, anyway, he says, since “to argue that something is so because it is in the Bible is more than intellectually bankrupt—it is unserious, and unworthy of the great Judeo-Christian tradition.”  (In other words, taking the Bible seriously is a disgrace to those who take the Bible seriously.)

Three … church attacks.  Across California and around the country, Mormon temples, Catholic churches, and evangelical congregations have been picketed, mobbed, invaded, damaged, and desecrated.  In many places, church members have been verbally and physically assaulted.

Five … attacks on the elderly.  In Palm Springs, California, protesters yanked a cross out of the hands of an elderly woman and stomped on it.  In nearby Carlsbad, a man assaulted an elderly couple who put up signs in their yard supporting Proposition 8.

Six … racist attacks and insinuations.  Blacks (who supported Proposition 8 in large numbers) have been accosted with racial slurs—not in inner-city neighborhoods, but in areas like wealthy Brentwood, where many report being physically threatened as well.  Ironically, even some blacks who picketed against the proposition were verbally assaulted by other same-sex activists.

Seven … co-opting the Civil Rights movement.  These same activists have made disingenuous efforts to paint their campaign as the philosophical parallel to what blacks endured half a century ago—as if securing public enthusiasm for legal sexual behavior was somehow the moral equivalent of winning voting rights and access to public facilities.

Eight … indoctrinating children.  Those pressing the same-sex agenda continue to focus an abundance of effort and resources on brainwashing the next generation of children other than their own.  For this, they are using health classes, assemblies, field trips, and other venues away from parents to acclimate children as young as kindergarteners to the idea that same-sex “marriage” is as morally valid and laudable as real marriage.

Nine … despising democracy.  Unwilling to accept the voters’ verdict on Proposition 8, supporters of same-sex “marriage” are determined to do an end-run on the ballot box, accomplishing their objectives by judicial fiat and strong-arm tactics of tyranny, violence, and intimidation.

Ten … silence.  The conspicuous lack of criticism these vicious assaults have received from the leaders of the homosexual political movement speaks volumes.  Obviously, these activists have few qualms about the methods or madness being displayed by those who share their political priorities.  Their profound contempt for the most basic freedoms of the very citizens whose endorsement they demand is an irremovable stain on their cause.

That’s a full count—but the count goes on, because the judges of California’s Supreme Court haven’t ruled yet.  Awaiting their decision is a growing crowd of Americans who have repeatedly shown that they will go to the mat to protect marriage between one man and one woman—only, unlike the activists who oppose them, they’ve done it with a ballot in hand instead of a fist in the air.