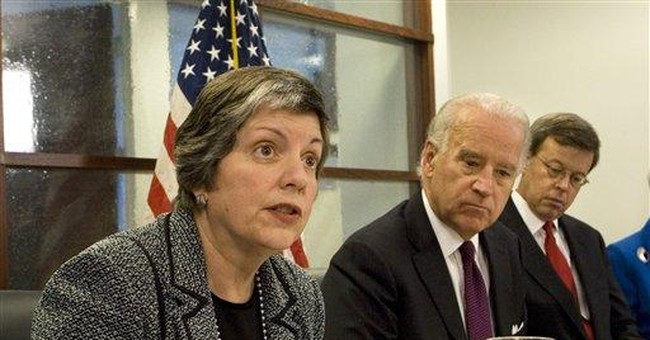 “…No doubt she’ll sail right through the confirmation process…”

This is the common assumption of Arizona Governor Janet Napolitano, the soon-to-be Secretary of Homeland Security. Indeed, it does appear that she will quite quickly be confirmed in the Senate, to the position for which Mr. Obama has selected her.

But if a majority of Americans knew - - and if the members of the Senate Homeland Security & Governmental Affairs Committee actually cared to inquire - about her actual track record in Arizona, Ms. Napolitano might not be such an easy and obvious choice to oversee the domestic security of our nation.

Without a doubt, Ms. Napolitano is an extremely bright and talented person. Well educated and intensely (and admirably) driven, she compensates for whatever she may lack in “flashiness” by projecting a sense of confidence, and a no-nonsense image of being “about the people’s business.”

The confidence, the image, and the “focus” have served her well politically in Arizona. Yet in examining her record, it’s difficult to say that Governor Janet Napolitano has served Arizonans well.

When Napolitano was first elected Governor in November of 2002, Arizona was facing an approximately $2 billion deficit. And while the state dug itself out of that hole quickly enough, Governor Napolitano sailed through the “boom years” of this decade (during which Arizona became one of the fastest growing states in the country) spending tax payers’ money in-discriminately, and covering up the spending with clever accounting gimmicks - - attributing current-day expenditures to future year’s budgets, and all the rest. Even as recently as a year ago, when Arizona’s new budget deficit had already become painfully evident, Governor Napolitano was arguing that her state should be providing “free tuition” at all of the state’s public universities, to any high school student earning a “B” grade average or higher.

Today, the Arizona state budget is right back where it was when Napolitano became Governor - - facing a staggering $2 billion deficit. And as she moves “up” to Washington, the Governor leaves for her predecessor Jan Brewer the tough task of cutting government spending, an ordeal made even more difficult by years of Napolitano’s unwillingness to reign-in her own spendthrift behavior.

In the public safety arena, a state governor’s equivalent of “homeland security,” Napolitano has been all over the road with policy positions. Early in her first term in 2003, she voiced support for a proposal to allow illegal immigrants to be issued state driver's licenses. When public outcry turned against her, she fell silent on the issue, and later refused to take a position on the matter when her fellow Democrats introduced legislation to actually make the driver’s license “dream” a reality.

And while 2003 saw the states of California and Texas contemplate whether or not to send state National Guard Troops to the U.S. / Mexico border, Napolitano opposed the idea for Arizona, arguing at the time that border security is a “federal issue” and not the job of state government. Yet three years later, in the midst of her 2006 re-election campaign, Napolitano shocked Democrats and Republicans alike by dispatching the Arizona National Guard to the Mexican border, to “help” with the flood of illegal immigrants.

In so doing, Ms. Napolitano grabbed international media headlines by becoming the first state Governor to place National Guard Troops at the U.S. / Mexico border ( a fact that she confidently reiterated during her Senate testimony). Yet Americans don’t realize that the move was almost entirely symbolic - - she sent troops to the border, yes, but she refused to authorize the troops to do anything besides merely “observe” the border.

One of the most extraordinary components of Napolitano’s Arizona legacy has emerged all within the past four months. With virtually no input from the state legislature, the Governor used her executive powers to mandate the purchase and installation of speed-limit enforcing “photo radar” cameras. The cameras are now dispersed literally everywhere in Arizona - - in the city, and throughout the state’s vast rural regions as well.

Napolitano’s approach to speed enforcement is bad enough for its draconian, big brother tactics. But worse still, in a blatantly cynical move, Napolitano established that citations from the statewide “speed cameras” would carry with them no penalty to one’s driving record - - just a monetary fee. As long as offending drivers are willing to write the check and pay off the government, they can continue to violate speed limit laws with no restrictions on their driving privileges, and the state “profits” all the more.

In recent weeks, Napolitano herself has even begun to speak of her “speed cameras” as a “solution” to the state’s budget woes. And this raises an important question: if Governor Napolitano is willing to reduce-down to a mere dollar figure the punishment assigned to the “crime” of speeding, will Secretary Napolitano be willing to place a mere price tag on the crime of terrorism?

Troops doing nothing at the international border. Driver’s licenses for illegal immigrants. Crime and punishment reduced to dollars and cents. This is Arizona homeland security, Napolitano style. Is America ready?