Austin Bay
|
Posted: Sep 30, 2020 10:01 AM
Share   Tweet
The opinions expressed by columnists are their own and do not necessarily represent the views of Townhall.com. 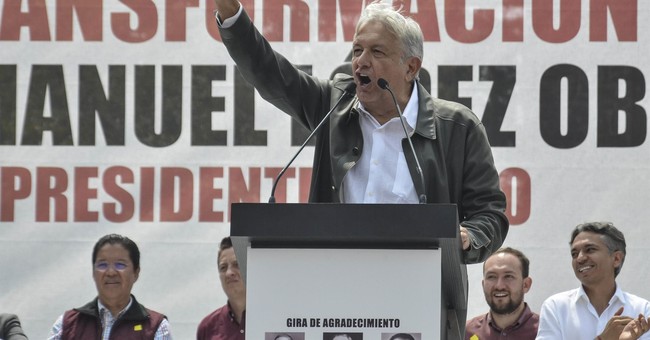 For decades, Mexican President Andres Manuel Lopez Obrador -- in North American mediaspeak, AMLO -- styled himself as a gifted man of the political left who was ... well, special.

As a perennial eccentric outsider, AMLO promised to bring Mexico radical change and new prosperity if he were to become president. Why did he push the brave-new-world bravado? Faith question. His ultimate answer wasn't unswerving faith in utopian socialism. Ultimately, his answer reeked of faculty-club narcissism. Mexico will change "Because I, The AMLO, am Me!"

Failed, blood-drenched, socialist-fascist-communist rubble from Nazi Germany to Soviet Russia to Castroite Cuba to Saddamist Iraq to contemporary Chavista Venezuela -- for that matter, to 2020 Seattle, Portland and Minneapolis -- had their murderous births in utopian socialist garbage and "specially empowered strongman" narcissist humbug.

Which leads to this confession. I've followed Lopez Obrador for four decades, and he's exhibited all the loon characteristics except for one: AMLO never struck me as a killer. Instead of a Castro killer or a Mao murderer, AMLO had the cut of a nutty populist professor enthralled by his own rhetoric. Moreover, he managed to express a basic truth shared by millions of Mexican citizens: From his gut, he insisted Mexico's political system is corrupted by violent criminal cartels, a complicit political class on the take, and billionaire elites living the lux life in fortress haciendas protected by special ops mercenaries and crooked cops.

Now this column must sketch the Iguala massacre of Sept. 26, 2014, because it is historically complex.

Never heard of it? Listen up close, for it is a lesson in the systemic destructiveness of Impunity and how Deep State Mexico savages Mexicans.

In July 2018, when AMLO won an overwhelming victory in Mexico's presidential election, his MORENA political party broke with the Mexican left and center-left. The political realignment and the electoral victory demonstrated his political savvy.

Perhaps that was the first hint I ever had that AMLO wasn't a total joke. The second came two days after he was inaugurated in December 2018. AMLO posed for a photo with the parents of one of the 43 students from Ayotzinapa Rural Teachers' College in the Guerrero state who went missing on Sept. 26, 2014 (were abducted and killed). He promised he would establish a truth commission to answer the questions that former President Enrique Pena's administration had failed to answer.

AMLO's promise put his administration on the line. And I wrote that in a December 2018 column.

Impunity -- that's the deep issue. For disenchanted Mexican citizens, "impunity" means injustice embedded within their nation's governing institutions and society. It expresses deep disgust with political and economic leaders who escape responsibility for their crimes.

Impunity directly connects to the Iguala mass murders. The students were slaughtered. Bodies and human remains kept appearing -- but only low-level actors were arrested.

In 2015, independent investigators concluded the Pena government's investigation was flawed. However, Pena was still president. Impunity: The judicial system did not challenge the lies he and his minions spun.

On Sept. 26, 2020, AMLO's administration kept its promise when Attorney General Alejandro Gertz Manero issued 25 new arrest warrants for individuals involved in the 2014 massacre. Gertz and his office noted that the new warrants included members of the federal police and Mexican military. The new warrants implicate the highest levels of Mexican law enforcement and, ultimately, Enrique Pena himself, for police and the military were involved.

Gertz bluntly accused former President Pena's administration of a massive cover-up, a "manipulation" and "a massive media trick." One of his prosecutors added that the new warrants target "the intellectual and material authors of the disappearance." AMLO told Mexican media: "The truth, the authentic truth, has to be known. That's the commitment."