The Stakes in Congo: Lives and Lifestyle

Austin Bay
|
Posted: Jan 10, 2019 12:01 AM
Share   Tweet
The opinions expressed by columnists are their own and do not necessarily represent the views of Townhall.com. 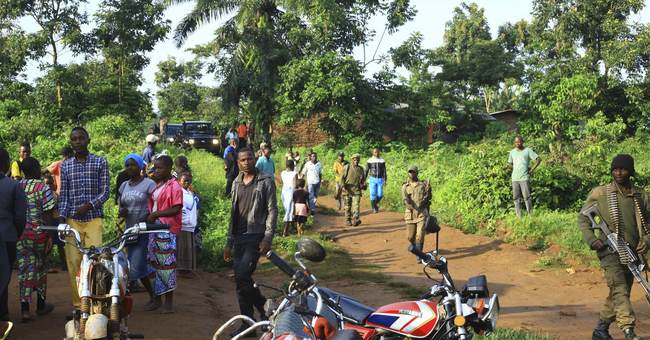 If you advocate electric vehicles and dote on cellphones whose manufacture depends on Congo's minerals, then the Democratic Republic of Congo's flawed Dec. 30 presidential election matters because it can affect your digital lifestyle.

The election to replace term-limited President Joseph Kabila was originally slated for late 2016. The constitution, which drew on the peace agreement that ended the civil war, required he cede power.

But the crook didn't. Kabila and his corrupt regime delayed the vote and held power for another two years. During his unconstitutional extension, Kabila sought ways to continue to dominate the executive branch, either through a surrogate or by retaining personal rule.

Kabila and other corrupt elites use the presidency and its bureaucracies to plunder for personal gain. Controlling access to Congo's world-class mineral deposits is a lucrative scam but by no means their only graft and looting gambit.

Rampant corruption, shredding the constitution and the physical intimidation of opponents by pro-Kabila security forces have seeded public rage of the sort that explodes when triggered.

A contested election is a trigger. If Kabila decides to remain in office under the guise of maintaining security until disputes are resolved, violent street reaction is guaranteed. Chances of this igniting another civil war cannot be dismissed.

Congo's neighbors understand a revived civil war could expand to a regional war. On Dec. 27, representatives from several central and southern African nations met in the "other Congo," the Republic of Congo-Brazzaville (a DRC neighbor). They discussed how to respond to "spillover" conflict from Congo should post-election violence erupt. To emphasize their concern, Zambia, Angola, Uganda, Rwanda and South Africa didn't send bureaucrats; they sent senior government leaders.

South Africa and Angola are regional military heavyweights. Angola borders Congo and fears another wave of Congolese refugees like those Congo's Kasai war generated in 2016 and 2017. South Africa is the key contributor to the U.N.'s Force Intervention Brigade, which serves with the MONUSCO peacekeeping operation.

Yes, MONUSCO still has 16,000 soldiers on duty in Congo. The government it helped stabilize has now put sustained peace at grave risk. However, armed peacekeepers give the U.N. gun-barrel leverage over Kabila. Pressure from the U.N., the European Union, the U.S., Canada and Britain ultimately forced him to hold an election.

Yet international presence and pressure didn't prevent Kabila from running a handpicked surrogate, former interior minister and henchman Emmanuel Ramazani Shadary. Nor did they stop him from attempting to undermine opposition candidates Felix Tshisekedi and Martin Fayulu.

No surprise -- grounds for a disputed tally began to emerge before the election began. As this column is written (10 days after the election), accusations of vote rigging and ballot tampering are rampant. A few highlights: The Kabila government shut down internet service to prevent the dissemination of "fake news." It decided 1.2 million likely opposition voters in eastern Congo could not vote until March. Why? The Ebola virus might spread. Citizens in the areas voted any way.

On Jan. 5, Congo's Catholic Bishops Conference said that the Independent National Electoral Commission must "publish, with all responsibility" presidential election results. CENCO's secretary-general reported that vote tallies its observers have seen "reveal the choice of one candidate" as president. Later a CENCO spokesman said that there is "a clear winner" in the election. CENCO implied the victor is an opposition candidate. Rumors say it's Fayulu, with Tshisekedi second.

The Catholic Church is Congo's most trusted nationwide institution, the only national institution that is not regarded as corrupted by Congo's wealthy families and elite politicians.

CENCO deployed over 40,000 election monitors throughout the country. SYMOCEL, another citizens group, deployed 15,000. The monitors were in position to detect voting trends.

Official vote results are now due in mid-January, but the rumor mill insists Shadary finished a distant third.

That means Kabila lost. Will he go? If he doesn't, prepare for a major bloodletting.