Austin Bay
|
Posted: Feb 28, 2018 12:01 AM
Share   Tweet
The opinions expressed by columnists are their own and do not necessarily represent the views of Townhall.com. 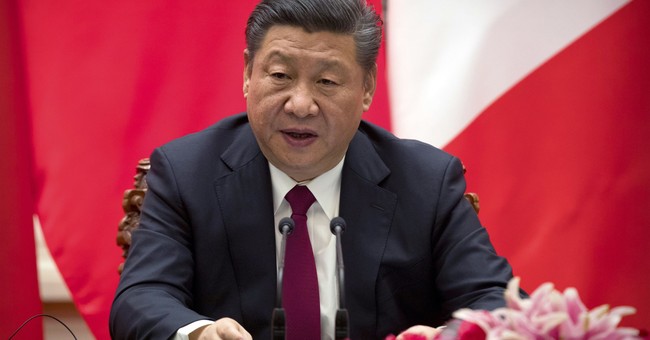 Xi is this century's most powerful Chinese leader. His power matches that of modernizer Deng Xiaoping and approaches that possessed by Chairman Mao Zedong.

Changing the constitution sets legal conditions for one man rule without term limits. Xi could reign until 2040.

As it is, Xi already possesses ultimate decision-making power in China. He is President of China and Secretary-General of the Chinese Communist Party. In 2016, he succeeded in obtaining the title "core leader" from the CCP. That title went beyond mere presidential political authority. Xi's "thought" provided ideological guidance. To Chinese ears the title echoed the political poetry hallowing Mao.

In my view, becoming chairman of the Central Military Commission was his biggest name-plate acquisition. Running the CMC gave him an unusually strong grip on China's military. In 2017, he shrank the CMC to seven seats. Xi loyalists filled the other six seats.

Is Xi on a personal power trip? Yes. He used a highly publicized anti-corruption campaign to purge his political opponents and remove some anti-Xi officers in the military.

However, something more than the usual Stalin-Hitler-Saddam wannabe motivation is at work in China.

China has a Great Dilemma. Its savvy Communists know the value of a competitive market economy. At the same time they demand dictatorial control over what Adam Smith called "the invisible hand" of individuals engaged in free enterprise. Free enterprise might lead to calls for political freedom.

For over three decades China's Communist leaders have sought to maintain domestic stability while simultaneously pursuing these conflicting policies.

Twice since 1949, the CCP has experienced great disunity. Mao's obscene Cultural Revolution wreaked havoc on the country. The second era of disunity followed the June 4, 1989, massacre in Beijing's Tiananmen Square.

In 1989, China's economic reforms were giving the people a taste of prosperity. In Tiananmen Square, the CCP heard free market-spurred calls for political reform. One group made a foam and papier-mache statue they called the Goddess of Democracy.

Xi and his cohort know the Communist dictatorship still lacks legitimacy. They have decided to gamble that investing power in one man for at least two more uninterrupted decades will eliminate any future domestic demands for genuine democracy. During that same period, China will become a world power superseding the declining United States.