Austin Bay
|
Posted: Feb 17, 2016 12:01 AM
Share   Tweet
The opinions expressed by columnists are their own and do not necessarily represent the views of Townhall.com. 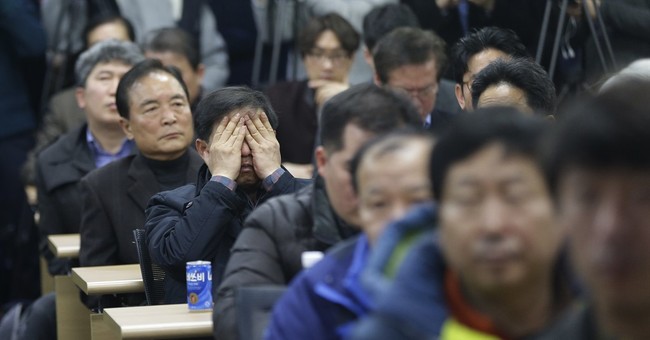 The latest closure of the jointly-administered South Korea-North Korea Kaesong Industrial Region illustrates the limitations of over-reliance on "soft power" -- in this case, Seoul's well-intentioned economic and diplomatic power-- when confronting a vicious dictatorship that relies on "hard power" military might and terror for survival and prestige.

That describes the North Korean regime in a nutshell, so to speak. To retain power, dictator Kim Jong Un's pathological regime violently subjugates North Korea's wretched populace. His regime glorifies its quest for nuclear weapons, and on a daily basis threatens South Korea, Japan and the U.S. with nuclear immolation. Kim's ballistic missile tests are a macabre form of advertising, not as noxiously vile as an ISIS beheading video, but serving the same terrifying purpose. Among the vicious, negative prestige is prestige.

Several military analysts have concluded the missile North Korea test-fired Feb. 7 could strike the continental U.S. That's a dire threat. It must be acknowledged, and -- at some point -- resolved.

It goes without saying that diplomatic information and economic power can help reduce North Korea's existential threat. "DIME" -- that's one acronym for the four elements of national power: "Diplomatic," "Information/Intelligence," "Military" and "Economic" power. They complement one another.

Applying soft power to Pyongyang to avoid war was the concept behind The Sunshine Policy South Korea began implementing in 1998. Great name -- very "war is not the answer." But for many, "soft power" became the only answer.

In 2002, (Sunshine Policy's apogee), Seoul formally proposed Kaesong. Seoul would finance a cooperative manufacturing park in North Korean territory, 10 kilometers above the Demilitarized Zone. Southern managers and business teams could commute from Seoul, a scant 50 kilometers south of the DMZ. South Korea would supply power and water. In Kaesong, South Korean managerial expertise and manufacturing technology would combine with North Korean labor and benefit both Koreas.

The goal was most ideal: convince North Korea that war is not the answer. Kaesong would demonstrate that Seoul could separate politics from economics and create a win-win pay off. Thousands of North Korean workers would see firsthand that southerners were not bitter adversaries. Over time, as the economic pie and bank roll grew, the Kim regime's belligerence would fade...

Yet South Korea stuck with Kaesong. Despite murderous acts of war by North Korea, the worst being the 2010 sinking of a South Korean naval vessel that killed 46 sailors, South Korea let it expand. In late 2015, some 54,000 North Koreans worked in Kaesong.

Now, thanks to North Korea's psychopathic belligerence, the Sunshine is gone. On Jan. 6, 2016, Pyongyang tested what it claimed was a hydrogen bomb. South Korea and Japan warned the North that proceeding with another missile test would have consequences. Feb. 7: North Korea launched. Feb. 10: South Korea withdrew its citizens from Kaesong. Yes, Seoul closed it, pre-empting North Korea. On Feb. 11, North Korea went through the pretense of closing Kaesong.

Seoul has asked the U.S. to provide it with advanced anti-ballistic missiles. Do these events mark a turn for the worse? Perhaps. However, North Korea has failed to turn for the better. I think they mark a return to realism. South Korea has learned an old lesson -- soft power must have a hard spine.