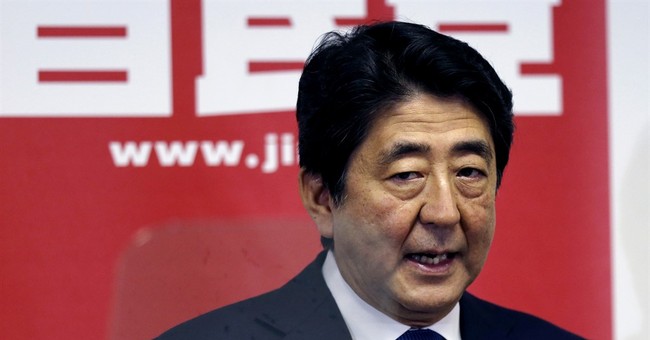 No more. Japanese forces may now conduct operations abroad, when approved by parliament. They can more easily conduct military operations with allies to defend common interests. They can aid allied forces even if Japanese territory does not suffer armed attack.

These changes have immense strategic significance. That's intentional. Asia has changed. It's 2015, not 1945.

This week, in New York for U.N. meetings, Abe told Bloomberg News that Japan and China need a stable and friendly relationship. He added: "I think both countries should make efforts to that end."

Yes, Asia has changed. It continues to change. Chinese military power is expanding. That's no surprise. Zhou Enlai made a modern military one of China's Four Modernizations.

China, however, is using its new sword to wage a creeping war of territorial expansion. Creating islands with air bases in the South China Sea is the most blatant example of this imperial war. It is destabilizing East and Southeast Asia.

Japan's changing security posture and Abe's bid for stable and fruitful relations with China are complementary policies. Desire for peace and thorough preparation for war are closely related. Roman strategist Vegetius knew it. He gets credit for formulating the epigram that sums it: If you want peace, prepare for war.

Contrast Vegetius to the procrustean faithful who fervently believe their demonstrated refusal or inability to defend with force -- radically expressed as disarmament -- produces peace. The faithful's virtuous words and weakness will translate into peace because. Because why? Well, here's one. Because potential opponents now have no reason to fear, they, too, shall wage peace.

Got that? Aggressors get it. Despite the faithful's zealous certitude, for millennia aggressors have preyed upon this mental disability, murdering hundreds of millions in the process. Hence Vegetius' sane advice.

Many Japanese do favor the old restrictions. Sincere pacifists constitute a slice of the opposition. However, left-wing opponents with old-time ties to the Soviet Union had other goals. Moscow wanted a weak Japan, because defending it required U.S. military assets that could be used elsewhere.

China vehemently opposes Japan's altered security posture but ought to blame itself. China has repeatedly threatened to go to war with Japan over disputed islets.

Southeast Asian nations bullied by China's South China Sea gambit (Vietnam and the Philippines, for example) are seeking powerful allies to counter Beijing's threats. The U.S. is their preferred ally, but they know the naval forces of a democratic Japan operating in conjunction with the U.S. Navy gives island-building Chinese militarists additional pause.