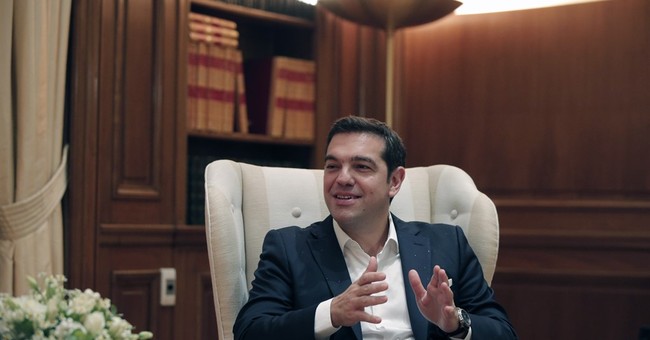 Greece has compulsory voting, but the law is not enforced. Many laws in Greece are selectively enforced -- which is another Greek problem.

I wonder whether the slide in voter turnout indicates that Greeks are weary. Populist rage only lasts so long, and yet the crisis continues. Weary resignation or perhaps sullen disgust often replaces outrage.

Greeks ought to be weary. Their curious form of national stagnation has to sap you. An oxymoron links two things that appear to be opposites. Since mid-2008, Greece has experienced churning, agitated stagnation. Political instability entwines with economic turmoil. Instability includes violence. Rioters have burned Athenian neighborhoods. Populist extremists of the far left and right issue terrorist threats in the name of economic justice and national identity.

Repetitive national elections are surely tiresome. Greece has had three this year -- two parliamentary votes and a referendum. September's poll returned Tsipras and Syriza to power along with its oddball coalition partner, Independent Greeks. Together they hold a slender parliamentary majority.

Did this election change anything? Well, maybe. In January, Tsipras was a hard-left Marxist firebrand who vehemently rejected a monster he called austerity. Who wants austerity? Why, it's less than what you want, or less than what you have come to expect.

Alas, this summer a chastened Prime Minister Tsipras, facing expulsion from the Euro-zone, agreed to a new bailout program.

Yes, he flip-flopped, though he resists that description. However, he called a snap election and during the campaign vowed he would meet program requirements. He shrewdly sold himself as representing change. The program means accepting, well, austerity. Tsipras must make budget cuts and pass 60 reform laws by year's end. The question remains: Will he do it?

We know how Greece got here. Greek productivity could not pay for the lifestyle its citizens desired. The productivity of other Euro-zone nations financed Greek good times and kept Greek politicians in power.

Greece lied to obtain the largesse. When the Euro-zone officially formed in 2001, Greece claimed it had a GDP deficit of 1.5 percent. In 2012, former Greek budget minister Peter Doukas said the real 2001 figure was 8.3 percent. Over the years, Greek governments violated fiscal agreements, borrowed money they could not repay and managed to hide the lies. European Union monitoring systems failed to detect the buildup in Greek debt.

The Greek people, who supported these lying governments, enjoyed "other people's money." Now German, French and even Italian workers say no more. Italians complain that Greek government worker pensions are far more lavish than theirs. No la dolce vita on our euros.

As for selective law enforcement: Systemic crookedness stymies economic growth. Greeks know it. A June 2010 poll found that 78 percent of the Greek people "accept the view that many or all in government are corrupt." That same year, a Greek finance ministry investigation uncovered extensive tax evasion, corruption and bribery in its tax collection offices. Greek tax evaders cost the country an estimated $27 billion to $30 billion a year.

Here's the big story. In Greece, we witness another hard example of an old lesson. Economic reality shakes and eventually shatters political fantasy. Fantasy may fade, but denial tends to die hard. All too often, it dies violently.

Weariness is not an ideal motivator, but productive weariness is preferable to destructive violence. Are Greeks finally weary enough to demand honest governance and work to pay their debts?