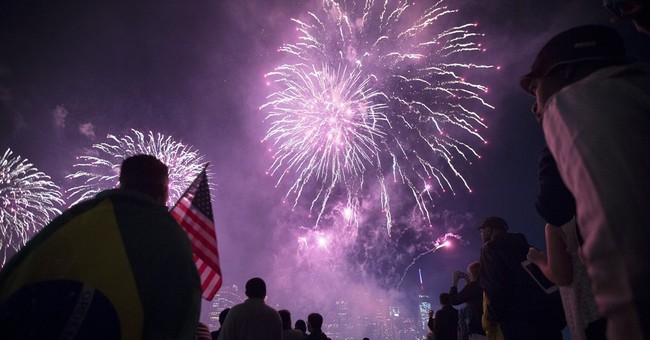 "Democracy! Whiskey! And Sexy!" an exuberant Iraqi yelled as American soldiers entered his hometown, the southern city of Najaf.

His phrase became a motto. I think George Washington would have loved it. He fought for freedom and, at Mount Vernon, distilled whiskey.

Our Najafite didn't spontaneously blurt this quirky mingle of institutionalized liberty and libertinism. The New York Times said he replied to a question asking how he hoped Najaf might change since Saddam Hussein's Baath Party no longer ran it.

The incident occurred on April 2, 2003, the same day Grand Ayatollah Ali al-Sistani's Baath jailers fled Najaf. For 10 years, Saddam kept Sistani under house arrest. Though the U.S. presence freed Iraq's supreme Shia cleric, no one shouted, "Religious freedom!" Perhaps "Democracy!" covered that. It should, but doesn't always, not even in the USA.

Our man in Najaf understood that democracy comes first. Compared to Saddam's libidinous sons, Hollywood's hedonists are rank amateurs. Saddamists would let you sip Kentucky's finest while running a cathouse, but you had to kowtow to Baath elites and guarantee them a cut of the action.

Non-connected? Forget it. Saddam ruled by fear. If he turned on you, you died, gruesomely, often by torture.

Our Najafite thought democratic laws allowed average Alis to do things and have things the dictator denied or strictly controlled. Buying bourbon and haunting nightclubs made his point, with trans-cultural humor.

In 2015, Iraq has whiskey and sex. However, Iranian-backed militias bully Baghdad, and the Islamic State maniacal terrorists control chunks of the country. While Iraq has run several national elections, its government is moribund.

Yet today more Iraqis enjoy greater freedom than they did under Saddam. Media are much freer. Everybody mouths off and criticizes the government.

Democracy is a convoluted system in which criticism is encouraged and governing involves the consent of the critical governed. It asserts that individual citizens possess rights (liberties). But liberty without responsibility may degrade to libertinism, and so democracy demands shared responsibility. Got that? Individual rights, but shared responsibility? Using checks and balances, a democracy attempts to run powerful institutions while restraining their power.

The Declaration of Independence, the U.S. Constitution and the Federalist Papers provide pragmatic guidance for organizing and maintaining a democratic republic. However, some major structural inconsistencies (e.g., slavery) ignited our bloody Civil War.

In 1814, John Adams expressed pessimism: "Democracy never lasts long. It soon wastes, exhausts and murders itself. There was never a democracy yet that did not commit suicide."

Yet the U.S. has survived near-suicidal civil war and other rebellions. This may disappoint our Najafite: In 1794, President Washington put down the Whiskey Rebellion. Armed distillers resisted taxation. Commander in chief George personally led the army. Rather than fight Washington (he was the top combat officer in the Americas), the rebels dispersed.

Democratic societies are difficult to create and keep. Maintaining democracy requires political maturity and restraint. At the individual level, that means recognizing the difference between personal liberty and selfish license.

At the national level, it takes more sobering commitments. French philosopher Jean Francois Revel, in his book "How Democracies Perish," wrote: "Societies of which permanent criticism is an integral feature are the only livable ones, but they are also the most fragile." Revel concluded that democracies are threatened "as long as theirs is not the only system in the world," and they "must compete with systems that do not burden themselves with the same obligations."

The obligations involve shared responsibility. Such responsibility may entail risking war with "systems that do not burden" their people with obligations. These prison societies -- like Saddam's Iraq or Vladimir Putin's Russia or the Kims' North Korea -- are ruled by lawless whim.

You like the right to mouth off? That's democracy, and from it your version of whiskey and sexy flow. If you appreciate that right, thank an American soldier, should you have the chance. And happy Fourth of July.